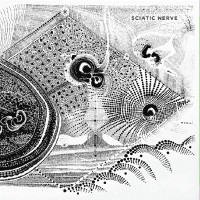 I jumped into Sciatic Nerve’s debut LP completely blind and unaware of who they were or what they were about. The audio gamble turned out to be in my favour, San Francisco’s Sciatic Nerve delivered up some fast paced and energetic 1980’s influenced melodic hardcore.

Following some minor investigation I learned that the individual members of Sciatic Nerve are not new to creating music that I enjoy. The band consists of members of iconic punk band The Swingin’ Utters, as well as from notable punk bands, Nothington and Western Addiction. The members have created a record that feels nostalgic but also fresh. You can hear the influence of Black Flag and The Misfits here, but the vocals add the perfect touch of snotty melody to bring all of the songs together. The melody and well written song structures presented in this self titled full length nicely separate Sciatic Nerve from the pack of other bands flying the throwback 1980’s hardcore flag.

The album starts out fast and punchy with opening track “Sciatic Nerve” that immediately draws the listener in; the record keeps the quick and shredding pace with the following 3 tracks. Track 5, titled “Get Away” starts to change things up with a slow burning rock and roll number featuring a catchy and memorable crooned chorus. The latter half of the record offers up a more diverse set of songs, going from quite melodic to blast beat filled hardcore with heavy droning breakdowns. All of which keep the entire record fresh and energetic – exactly how I enjoy hardcore.

The final track “Leave Me Alone” is contender for one of the strongest and heaviest tracks on the record, it is blisteringly fast and heavy with a great nod to My War era Black Flag. The slow and heavy breakdown at the end almost warrants a return from mosh retirement. While the band brings back a lot of 1980’s and early 1990’s feeling, the nod to more recent influences still applies, including influences that range from the speed and raw nature of Kid Dynamite, to American Steel and Shook Ones.

Sciatic Nerve’s debut self-titled LP is a stand out punk rock record. The album is straightforward and to the point with very little filler. The songs are short and the perfect length for a band of this genre – there is no time left to even entertain boredom. Sciatic Nerve is an awesome new project from talented and experienced musicians, I highly recommend it to fans of hardcore and punk rock alike.