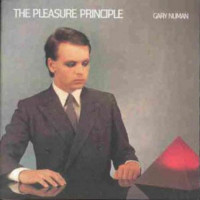 The third album by Gary Numan, and first under his own name (He dropped his band name Tubeway Army six months prior) is 1979’s cult classic The Pleasure Principle. This is the album with the song “Cars” on it, but we will get to that in a moment.

Gary Numan was carving his own path in the late 70’s with a total synthesizer approach accompanied with a robotic “Thin White Duke” appearance. His style seemed to ape David Bowie very closely and it got to the point where both butted heads and became rivals for a while. The similarities really stop there though, because Numan and Bowie went in separate directions on their craft.

Numan’s previous album, Replicas jump-started his career in those early days of proto New-Wave and Goth Rock. His vocals sounded like they were a part of the same machine he was playing and the use of a real band blended the music all together quite well for a studio-focused album. This was all relatively new back then and sort of mind blowing I suppose.

This still holds up today in a charming simplistic way.

“Airlane” is a nice album opener that is all instrumentals. The use of synths and the progression of the backing band make the song have a nice driving force that I can imagine being fun to dance to back in the day and probably still now if you go to the right club. “Metal” is a nice follow-up track that ushers in Numan’s nasally vocals. The repeating rhythmic music is repetitive almost in the same way that Kraftwerk were doing at the same time, but in this case, it feels a bit more alive than what those German musicians were doing. Kraftwerk are still awesome though.

Songs like “Complex” and “Tracks” show a melodic use of the synths that try to replicate a more classical music feel but all done through primitive electronics. Numan also sings with a more mellow tone and accentuates it with moody, downtrodden lyrics thus highlighting the gothic undertones. They are a nice paring of tracks but where the album really shines is in the more aggressive songs.

“Films” has this subtle, dark, foreboding synth that builds up the track while the bass guitar keeps a pulse throughout. It is a nice piece of music and one of the best tracks here but topped immediately by the song “M.E.”. Listen to “M.E.” and think back to the year 2001 and the song “Where’s Your Head At?” by Basement Jaxx. Their sampling of the repeating crunchy synth was a wise decision that made for a very catchy single from their album Rooty. I took notice back then and did not know it was from a Numan song.

“Observer” is another harder hitting song with that ever-present synth just melting across the record. There is a reason why Numan is considered the king of synth based rock. The only other acts I would compare him to are of course Kraftwerk, The Human League and the underrated Ultravox. (Check out Ultravox’s album Vienna for some really cool Synthpop!)

Closing track “Engineers” is a good sendoff for the album with a marching like presence that takes the listener down the synth rode, but back up one more track and we have the legendary single “Cars”. There’s not much to be said anymore about this pop gem. It just reeks of the 80’s even though it was written in 1979 (made the top 40 in the US in March 1980). The lyrics are catchy and the song itself masterful in the New-Wave style. It has become a cultural staple in both music video form and pop radio. It will never go away and that is ok because there are worse songs out there.