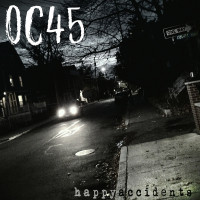 I try to listen to as many new records as possible in any given year, but I’m well aware that I still miss plenty. It was only by happy accident (pun intended) that I came across the new OC45 album because I saw them play a couple months ago. The Boston quintet quietly released Happy Accidents way back in January on their own Birdseye Records. What’s not surprising is that I caught OC45 live. These guys are road warriors, and it seems like they’re always on tour.

Happy Accidents is actually the six year old band’s first full length after a bunch of well received EP’s. The constant touring really seems to have solidified OC45’s sound. For those unfamiliar, they play gruff and gritty, but still sensitive and melodic punk. The thing that separates them from the glut of groups playing this style is their energy and aggression. They also seem to be more influenced by classic punk than many of their contemporaries.

On opening track “Down We Go”, the guitars and drums lock together and have an almost dizzying effect until the catchy verses and choruses kick in. Second track, “Titled”, is one of the fastest things on the album. It gives way to the slightly slower and more somber “This Bottle’s Got Your Name On It”. “Keep Your Guns” has a catchy but profane sing along chorus. “Lady Death” ups the almost metallic intensity. “Trainwreck” is yet another not safe for work sing along. The emotional “Dad’s Home” adds a little piano and organ to the guitar heavy mix. All are standouts. For me, the reggae flavored “New Regulations” is a swing and miss. OC45 redeems themselves with closer “Philly”.

Happy Accidents does not suffer from not having the backing of a bigger label. It sounds great and the packaging is nice too. OC45 feels like a band that’s still on the rise, and I expect more great things from them in the future. In the meantime, this is definitely worth checking out.