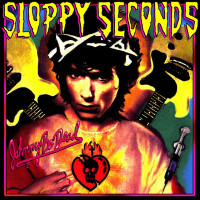 I’m a huge Sloppy Seconds fan, so I’m thrilled for any new release. Especially when it’s the first new material from the band in eight years. This 7 inch is the second in a series called Split Hits the Fans from Indiana upstart Failure Records & Tapes. The point of the series seems to be to match an established punk band with an up-and-coming punk band. (The first in the series was The Queers with Bass Amp & Dano.) Here we get a new Sloppy Seconds song, and two tracks from Dangerbird that are also going to be on their upcoming full length.

A little perusing of the liner notes will tell you that “Johnny Be Dead” is not in fact a new Sloppy Seconds song, but rather a very old one. Old school fans might be glad to hear that it was written and recorded way back when guitarist Danny ‘Roadkill’ Thomson was still in the band. (Dr.Roadkill left in 1993.) It was produced by Zero Boys’ Paul Mahern, and is likely from the Destroyed (1989) era. Others may regret that it’s not really something fresh. Either way, it’s a cool song that was previously unknown to most of us.

“Johnny Be Dead” is a song dedicated to the late, great Johnny Thunders. The chorus hook is borrowed from the golden oldie by The Contours called “Do You Love Me?”. Johnny Thunders & the Heartbreakers famously covered the song on their 1977 album LAMF. The catchy track tells the tragic tale of the man and works in references to as many of his song titles as possible, including “Too Much, Too Soon” from his early days with the New York Dolls.

Other notable songs referenced include “So Alone”, “Born to Lose”, “One Track Mind”, “Baby Talk”, “Chatterbox”, “MIA” and “Dead or Alive.” I'm sure there's probably more that I missed. I’ve always enjoyed these punk rock trivia tracks. (NOFX is the master of this type of song. See “We Got Two Jealous Agains” and “Jaw Knee Music” for great examples. I've actually bought records based on them being name dropped in other songs.) Like I said, overall it's a cool song.

The two Dangerbird tracks on side B were a pleasant surprise. The St.Louis based trio plays catchy, retro garage punk. “Bad News” is short, poppy and upbeat, while “Berta” is a bit more riff heavy. Both are really solid. This 7 inch inch is available in multiple colors and in very limited quantity. I got 136/500 on purple wax. I have some inside information on the next couple of Split Hits the Fans, and this seems like the type of thing I could easily get sucked into collecting compulsively. Check out this beautiful piece of vinyl and check out Failure Records & Tapes.