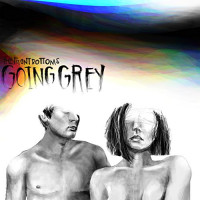 It took me a while to adjust to The Front Bottoms' new sound but hey, I came around. I loved their old folky yet catchy brand of acoustic music ("Flashlight", "Twin Size Mattress", "Swimming Pool")  and when they shifted more into pop territory it took me by surprise (honestly, I still jam "Historic Cemetery" like there's no tomorrow) but years later I can appreciate their bravery to venture out the comfort zone. Going Grey more or less follows in the same vein of the last album so if you hated that record, then this review ends here for you. If you didn't, then gear up for another batch of sweet pop medleys.

Songs like "Peace Sign" and "Vacation Town" are probably the best in terms of middle-ground, marrying their old style with the more mainstream and heavily polished approach of new. Brian Sella is as cheeky as ever but definitely tones back the raw emotion to deliver what feels like Tumblr banter. The electro-pop (and dare I say... dance) aspects are even more present than before on songs like "You Used To Say (Holy Fuck)" and "Trampoline" which for all intents and purpose don't have much in common with their old music.

Like it or not, TFB are breaking free and going places they want to, which is what counts. Selling out? More like finding their own way. And that's what art should allow bands to do, and artists in general. If anything, "Raining" is going to end up on a Sundance or TIFF award-winning indie film and then whether we like it or not, we'll have to admit the band made the right moves. Going Grey isn't gold but it's definitely bright in terms of their future.