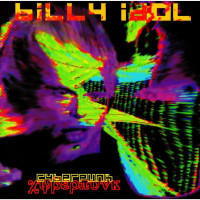 Blade Runner 2049 is a masterpiece in modern filmmaking. It is so good it has rejuvenated me into going back and checking out the Cyberpunk culture once again.

I am glad I did. This album is worth keeping.

Cyberpunk is a 1993 album by the one and only Billy Idol. A radical departure from his previous efforts, it was a sort of changeup that fans and the public were not ready to digest just yet. Looking back on it in 2017, it does seem dated and misconstrued, but do not let that remiss you from taking a gander. It’s an artistic vision that’s rewarding and brave, but also silly honestly.

Idol wanted to escape from his past. After suffering a broken leg from a motorcycle accident in 1990 (and also losing the role as the T-1000 in Terminator 2…) Idol spent a lot of time at home pondering on what direction he needing to take with his craft. After being interviewed by Legs McNeil (one of the original creators of Punk magazine back in 1975), who noticed an electrical muscle stimulator on Idol’s leg and referred him as a “cyberpunk”, he became inspired to explore the written works of William Gibson (Neuromancer, Jonny Nemonic, New Rose Hotel) and also cyberpunk inspired technology of the time. All this intertwined into him deep diving into a new direction of which he drew from greatly.

Idol changed producers from Keith Forsey to Trevor Rabin who introduced him to the home studio set-up, which he never used before. This was all new to him and new to most recording artists outside of those in the Electronic genre and other endeavors. Therefore, with one hand on a computer and the other holding up a book, Idol got to work on what would become his most polarizing effort to date.

The album itself is 13 tracks interspersed with brief interludes of field recordings, poems, and some weird futuristic gobbledygook. The flow of the album has a nice evenly setting, only to be cut up with some out of place spoken wordings and the mentioned interludes. A track for instance like “Adam in Chains” is a self-indulgent mess right from the start with this very strange, hypnotic performance made by an android sounding commenter trying to get the listener to experience a delusional mind break. This is then cutout with Idol coming in crooning as if this was a call back to his old song “Flesh for Fantasy” or maybe 90’s Depeche Mode. This is really the worst track on the album and I do not mind skipping it, but oh man, you must go look up the music video he did for it. In the video Idol has white dreadlocks. WHITE DREADLOCKS… He is also in a pool of some sort flailing around with a woman in water while being filmed in slow-mo and looking like Chris Isaak or something. It almost killed it for me, but I carried on.

Another music video he did, which is much better, is “Shock to the System”. In this video he is singing on the streets of what I can assume is Los Angelis all the while a riot is happening. Eventually the police show up and they beat the crap out of him. Shortly after his body starts going into full on horror with cybernetic parts breaking out of the skin and transforming him into a Borg rip-off. The song itself was meant to be a single and several different interpretations of the video were made, but the one that got airplay on MTV was the one mentioned. The legendary Stan Winston did the stop motion and it is eerily similar in style and movement to the cult classic Japanese cyberpunk film Tetsuo: The Iron Man (go watch that. I DARE you!). The track is also catchy and has some awesome riffage courtesy of Mark Younger Smith, but the cheese factor is very pungent.

Not to try and review each track but just mention a few more, Idol does an interesting cover of “Heroin” by the Velvet Underground. It is practically a new song and I only noticed it by the original lyrics which are the same, but sung in a totally different “pattern” which is jarring because we should all be so familiar with that song by now. There’s also the song “Concrete Kingdom” which has some awesome electronic instrumentals as well as the song “Then the Night Comes” which makes me think back on action scenes from movies of the 90’s, pre-Matrix.

The album as a whole is considered a concept album, and according to a 1999 retrospective review from the A.V Club, one of the "Least Essential Concept Albums" ever made. That is a bit harsh I would say because it has its fans and I doubt you could persuade them from the love they have for it, but back then, yeah… it was too radical and too much to take in. Ahead of its time, you could say again and again, yadda, yadda, yadda.

Things that it did do that are worth mentioning are the notion of it being “home-made” or as Idol put it, “overground-underground”. He wanted to do something like how Rap artists were doing, which was a self-made, independent album away from studio meddling. At the time when he was starting to record “Shock to the System” he noticed a fire going on in downtown L.A. This was during the L.A. riots of 1992 and while this was going on, he wrote the song with lyrics detailing what he was seeing, thus the video depicting rioting and violence which is one of those moment in time sort of things. As well as him using computer technology, he also dabbled into the proto-early days of the internet. He set up an account on infamous The Whole Earth 'Lectronic Link, also known as The WELL, one of the oldest virtual communities still in operation, full of self-titled cyberpunk purists and philosophers (they later derogated Idol and cast him out of the community for what they perceived as exploitation of their fan base).

Other endeavors taken to explore the cyberpunk culture, and desire for a more futuristic way of expression, was using an email address to connect directly with fans, CD-Rom digipacks and diskettes, website promotions (unheard of back then), computer design for the album artwork, "Blendo" cinematography Inspired by The Lawnmower Man, as well as fashion and a heavy enthusiasm for speculation on futurism which Idol often spouted to everyone he met when promoting.

This is what the album is mostly remembered for, not really the music but for Idol’s change and the approach he took to creating this huge flop. The reviews and sales were not good and his public image really took a hit as a result. The man did not make another album until 2005.

It is a shame in the end because the album is interesting and has a line that you can cross and simply enjoy on its own terms, and it is very nerdy. I would also like to point out that the almighty David Bowie, helped by Brian Eno, did something similar and even more grand with a supposed trilogy of concept albums starting back in 1995 with Outside (The Nathan Adler Diaries: A Hyper Cycle). He never finished the trilogy sadly, but there were rumblings that he and Eno wanted to go back one day. Anyway, Cyberpunk is one of those “lost” albums that has been forgotten and I’ve only gotten into by my recent rejuvenation of the genre as well as one of the best sequels ever made, Blade Runner 2049.

(This will become dated, but do not be one of those who didn’t go see Blade Runner 2049 when it was out in theaters the first time. Just experience it at least once. It is simply incredible filmmaking and a rare treasure that you will probably not see done in the same way again. They do not make movies like this anymore… also the soundtrack is very good.)