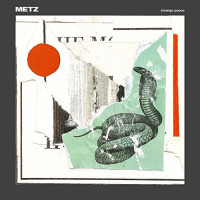 Metz are a Toronto act that draw a lot of comparisons -- from the Jesus Lizard, Refused, At The Drive In and personally, to countrymen Preoccupations (formerly Viet Cong). What Metz do however is transcend the post-punk genre and even the distorted noise-rock shoebox they're always lumped in, and produce something much more abrasive and caustic. This time around, it lacks melody at almost every turn, and this is a jagged strength few bands can play on. Granted moving from II to Strange Peace in this manner wouldn't have been easy if not for legendary producer Steve Albini.

Albini came on board, not to refine, but to expose their sound as raw as possible, which saw them record live to tape with him in America before returning to Canada to polish. In speaking to them, the three-piece mentioned how important he was to their process, which 90's fans know all about as he's worked with so many big acts including Nirvana. His magic unravels tenfold here, attacking and arresting at every angle here. Alex Edkins' vocals shine like never before with Metz's exposed sound bringing a grainy and emotional feel that the old albums crafted but which Strange Peace maximizes.

The volatile garage-sound of "Mess of Wires" and "Drained Lake" are most indicative of how disillusioned they sound now. The same for "Sink" -- all about disjointed riffs, chaotic sprawls and huge bursts of non-conforming rock. It's open-studio, it's demo, it's not... well, what you'd expect on a produced and finalized LP. And that's perfect for Metz. Even when the tempo gets slowed down on songs like "Sink" you can sense they're just as in-your-face as something like Fugazi yet they can be just as mellow as the Doors or the Stones. As "Raw Material" closes off, you can also sense, not just a political album, but one that's aware of how disconnected we are as people socially. Hopefully, this helps you connect back to that which is of value. Just make sure you don't turn the volume up too high because this is definitely going to scare people in how loud and harsh it is. Which I guess makes the album title all the more fitting.

Svetlanas: This Is Moscow Not LA