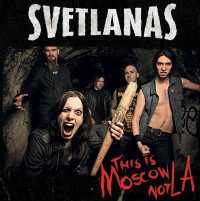 The Svetlanas ( "The Most Dangerous Band In The World”) are back with This Is Moscow Not LA, their follow up to their 2015 full-length Naked Horse Rider. The band picked up right where they left off and even gave us one or two surprises as well.

The album starts out with a bang with “Putin On Da Hitz” — an obvious knock against the current leader of Russia. It also sets the tone for what you hear on the rest of the record. It has the Svetlanas’ signature thrash filled musicianship mixed in with Olga’s sharp and confrontational vocals. And if that was enough aggression for you, on top of all of that Nick Oliveri chimes at certain points in with his unique screams and also takes over rhythm guitar duties for this track. “Lose Control” and “Let’s Get Drunk” have a few of the same aspects as “Putin On Da Hitz,” but they are a little more light-hearted and fall much more into the “party-anthem” category.

“Negative Approach” is definitely one of the stand out tracks on This Is Moscow Not LA. It strays a bit from the rest because it is much more hardcore oriented. You hear Olga’s faster vocals over the “controlled mayhem” that the rest of the band is playing. After a short build up, the guitar transitions into playing this high-pitched riff and Olga and Nick sort of “harmonize” their screaming during the chorus. The contrast between them works pretty well.

Interestingly, the Svetlanas added a cover of Motorhead’s song “Speed Freak” to the album. The twist though is that Olga does not sing on this track at all. Nick Oliveri* is the lead vocalist and he does quite well. It is a (somewhat) more melodic side of his singing that you don’t hear too often. This version has a little bit more urgency in it and and the band definitely sped up the tempo, but overall I think Motorhead fans will think that the Svetlanas did right by them.

*Note: The liner does not explicitly say that it is Nick Oliveri, but I heard through “word of mouth” that it is him singing on this track.