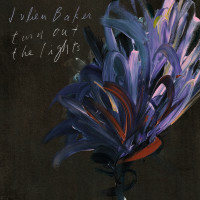 Julien Baker has been on my radar for about a year now after I heard her on Touche Amore's last record via "Skyscraper." I did some research and what I found was a young songstress ready to bring her Memphis woe to the fore and expose her heart and very soul. Turn Out The Lights accomplishes just that, teaching us that it's okay to hurt and heal, and more specifically, to believe in said light. It's also a great evolution and a mark of maturity from her 2015 debut Sprained Ankle.

Baker waxes poetic on so many things here -- family, friends and relationships. Stylistically, her subtle confessions are constructed to minimal sound-beds, built on guitar picks, piano keys and the hum of organs. She never forces her hand and the record opens with a bevy of these subtle-sounding tracks: "Appointments", "Shadowboxing" and the self-titled song -- all to great effect. I'll admit though that the rest of the songs follow in a similar vein and it gets a tad repetitive. I wouldn't say one-dimensional, that'd be too harsh but I honestly think she has the vocal prowess and lyrical finesse (way beyond acts like Laura Stevenson, Frances Quinlan and Waxahatchee, whom I all adore) to pull off other styles and to, well... rough it a bit more.

That happens with "Even" -- an acoustic track that strums like a '90s guitar interlude -- and this makes you want even more differentiation. However, even the songs that feel repetitive are masterfully done and as one big narrative, Baker delivers gold. Turn Out The Lights is a powerful listen, teaching you to live with your failures and fears, and to move from coping with them to actually loving them. A record about mistakes but one that lets you bask in their beautiful chaos because as she tells you, over and over here, life is all a learning experience... especially when we're navigating the dark.