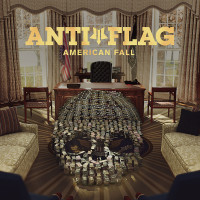 I’ll give Anti-Flag credit where it’s due: putting out a run ten albums without growing stale or alienating your audience is quite the feat, but nothing lasts forever, and Anti-Flag were bound to slip eventually. It's not like American Fall couldn’t have been foreseen; 2015’s American Spring (which, by virtue of its title, occupies same plane as “Load” and “Reload” or “¡UNO!”, “¡DOS!”, and “¡TRÉ!”) didn’t live up to the standard set by the decade and a half of Anti-Flag output preceding it, though it did lay claim to at least a couple of worthwhile singles. American Fall, on the other hand, while not completely devoid of interesting concepts or noteworthy moments, fails to put forth a single track I can see myself returning to a year from now.

Perhaps the most irritating feature of this album is the hollow approach it takes to convey some genuinely intriguing musical and lyrical ideas. This album isn’t so much overproduced as it is incompetently produced, and Anti-Flag isn’t a band that needs a whole lot of post-productional fluff to make their music pop. Even at their most low-fi, Anti-Flag’s music has been able to stand on its own, because, at their core, the songs are well crafted. I know that going after Benji Madden is low hanging fruit, but, while listening to the album with a critical eye, I found myself critiquing the production far more than the songs themselves. There were moments throughout American Fall where I genuinely wondered why I wasn’t just listening to 5 Seconds of Summer; at least their shallow lyrics suit the density of their music. For example, the closer, “Casualty”, actually starts out pretty promisingly, with the repeated battering of a single harsh chord for the first four seconds, before transitioning into the stereotypical song of the summer. There’s something unsettling about the way Justin proclaims “when I’m afraid of my name, I know I’m not free”, right before the band transitions into an incredibly generic pop punk refrain about nothing.

“Digital Blackout” is another example of a perfectly good composition defaced by the production. The mixing on the final chorus’ backing vocals is pretty egregious, and feedback noises used to conclude the track sound like they were pulled from a stock sound effect library. But “Digital Blackout” takes its biggest blow from over-compression. Its application to “Digital Blackout” causes the perfectly fine central guitar riff to sound like it should be underscoring a Rock on the Range promo: just assertive enough to get your blood pumping, but not distinct enough to grab your attention. Mix that with a lumbering minimalist percussion section and you’ve got yourself a boilerplate arena rock jam: the perfect soundtrack for diehard Muse fans to revolt to.

It’s honestly hard to separate American Fall’s writing from its presentation because they'll often bleed together. “When the Wall Falls” may be the worst offender on this front. For a song with such an eloquently stated message about a serious matter, the band sure throws in a lot of gimmicky bells and whistles. The utilization of the vibraslap and abrupt organ solo disrupt the tone in an otherwise well written song. I’m all for instrumental quirk, but “When the Wall Falls”’s attempt to implement more variety in its arrangement in comes off as more clumsy than daring.

At its heart, American Fall could have been a solid collection of compositions, but the way in which they were put to tape, sucks out all the life, gumption, or anything else these songs had going for them. Tracks like “Liar” with its bustling central bass lick, or “Racists” with its bouncier temperament, could very well translate into engaging moments in a live setting, but I’m not feeling it here. If American Fall is indicative of the direction Anti-Flag is moving in, the future is looking pretty bleak.

Allout Helter: The Notion of Control