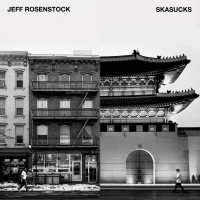 Jeff Rosenstock has set himself quite the high standard lately. Worry was probably the album of 2016 for me, no mean feat in a year in which Nick Cave and John K. Samson both dropped records. Jam-packed with melody, shoutalong choruses and incisive lyrics, it barrelled its way towards a breathless second half in which he apparently tried to cram every idea he’d ever had into an exhilarating genre-hopping medley. People who would normally sneer at pop-punk are taking notice too; he’s even getting good reviews on Pitchfork (and playing their festival, no less) these days.

So my expectations were high for Rosenstock’s first new music since that remarkable full length, and fortunately he doesn’t disappoint. “NEVERGONNAGETITBACKAGAIN!!!” races out of the blocks – you’ve got to love a song that only takes 15 seconds to get to the chorus – wrapping his trademark socio-political angst in an instantly memorable melody. It seems to be about loss of hope, as he laments the failure of “all the change they told us we could be”, with those in charge just waiting it out “until the fire in us dissipates”. It’s just under two minutes of prime Rosenstock, and would be the perfect bridge between Worry’s two disparate halves.

He also contributes a suitably rocking version of the country classic “She’s Got You”, made famous by Patsy Cline. It’s a much-covered song – personally I’m partial to Roseanne Cash’s version – but the Weezer-esque keyboard flourishes put some fresh spin on it. It hasn’t quite usurped Rosenstock’s take on Fiona Apple’s “Anything We Want” as my favourite of his covers, but it’s close. And for tongue-twisting hilarity I really want Jeff Rosenstock to cover NOFX’s “Jeff Wears Birkenstocks”.

Sharing the split are Seoul ska band Skasucks. Their side kicks off with “Attitude”, which opens with a lone funky bassline as vocalist Jinsuk succinctly explains how punk, ska and hardcore have shaped his character, ending with him screaming “that’s my attitude” before a brief squall of feedback. It’s a nice little intro, all over in 47 seconds, although not wholly representative of what’s to follow. The other two songs, standout “Midnight Cowboy” and “Suicide City” bring Jiwon’s organ much more to the fore, and to good effect. There’s an obvious 2 Tone influence, but with a little more aggression. In terms of the third wave, think organ-driven bands like Monkey or the Chinkees rather than those that skanked into the mainstream. They certainly would have sounded right at home on Asian Man Records in the late 90s.

All in all, this is a decent split. Jeff Rosenstock continues his hot streak – another original would have been nice, but given that he recently lost a notebook and digital recorder full of song ideas when his car was broken into we’ll give him a pass – while Skasucks prove that South Korea has more to offer the musical world than K-Pop and “Gangnam Style”.