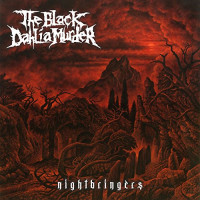 Nightbringers has been getting rave reviews on most of the metal sites, so I decided it was about time that I finally got around to checking out The Black Dahlia Murder. I usually try to stay on top of what’s going on with Michigan punk and metal bands, but somehow TBDM has always managed to elude me. Led by singer Trevor Strnad and rhythm guitarist Brian Eschbach, the Waterford (near Detroit) quintet has been playing their brand of modern death metal since 2000. This is actually the band’s 8th full length album. I’m not sure if Nightbringers is a good place to start with such a big discography, but it’s where I’m jumping in.

Opening track “Widowmaker” starts off with some epic ambience and drums before the riff and a Strnad scream. The double bass drum pummels your senses, and the vocals alternate between a demonic howl and a demonic growl. Whether or not I enjoy death metal usually comes down to the vocals. (I’m more of a thrash guy.) I like the way Strnad sings. There are no overly screechy highs or Cookie Monster lows. The words are delivered with the proper amount of brutality. (According to me. My wife disagrees from the next room.)

Ironically, the pretentiously named “Of God and Serpent, Of Spectre and Snake” kicks right in without any pretense. In general, TBDM’s riffs are harsh and heavy, just the way they should be. The solos are melodic, plentiful and mostly in the style of classic, melodic metal. Nightbringers is nine tracks and 33 plus minutes of technically sound aggression. My favorite song is probably “As Good As Dead”, with its wicked intro. In addition to being heavy, it features a solo that reminds me of my childhood favorite George Lynch. (From Dokken, but I’m sure you already knew that.)

One thing that must be said about Nightbringers is that it is consistently fast and heavy. The production is great too. As dense and heavy as it is, the individual instruments shine through. It also has very nice packaging. The problem I have is the same problem I often have with extreme metal. It’s sometimes hard to tell the songs apart. They just all sort of blend together. Hopefully that will get better with repeated listens, because overall this is a really solid record. I don’t love it as much as many metalheads seem to, but there’s definitely enough here to make me want to dig into The Black Dahlia Murder deeper.