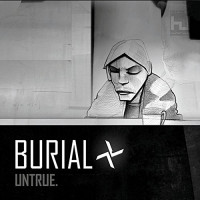 I have a lot of respect for William Bevan, a.k.a. Burial. I guess I respect his space and almost shadow self. He is like a shadow, or vapor. His presence is still mysterious to all despite him releasing a few pics to prove he is real. His secluded nature and desire to be alone is what gets to me. I used to want that persona. In these times, it is remarkable how he is still able to slip by and you not know it.

I remember 2007. A lot happened for me in my life that year. I had my first visit to California, I was making the best grades in my life while in college, and my self-harming depression had not kicked into full gear just yet. Somewhere in that time, Burial released his second full-length album Untrue and it was a call to arms in that later part of the decade. Its inspiration, about to become legendary.

I will not go into full detail on what makes this album the cult classic that it is. There is too much of a hill to climb in order to get the full amount, but we can take some brief glimpses.

For what’s it worth, this is an album of Electronic music. The music itself spans several micro-genres in the Electronic scene and the list goes like this: Grime, Drum n’ Bass, Two-Step, Garage, Jungle and Trip-Hop. Hip-Hop and Rn’B also slip in. The culmination of all those styles results in the Burial sound and what is now determined to be forever called, Dubstep. The thing is you cannot pigeonhole this into Dubstep. It is way beyond that.

Some cringe when they hear the term Dubstep. I will not argue with that reaction. However, just know this music is on another plain.

Artists with a cult following are interesting to observe. Fans wait with baited breath, ready to pounce on whatever the artist releases next whether it be art, film, writings, or in this case, music. I admit I am a diehard fan and have gone the crazy route of acquiring everything this man has done on vinyl. I haven’t done much OCD collecting for other things except when searching for old prints of Battle Angel Alia comics and retro NES and SNES games.

What makes this album so unique these ten years later is how it evokes a particular time and place, this instance being in the UK in the new millennium post 911 and the end of the Bush era. Think back then to now and Burial’s icy music still resonates with the atmosphere of those walking home at night in the cold and seeking shelter from the outside world. Sometimes we all want to escape into ourselves. Burial’s music helped people move like that.

The 13 tracks on this album are each a snapshot of perhaps the nighttime, or a smoke filled room. There is a haze here, an almost claustrophobic dankness that swelters off the floors and ceilings. This is the music of some rundown club, or a dirty taxi in the AM’s. Drunkenness, stoned, frightened, depressed, sick, it all complements the other in these tunes.

Burial isn’t really a particular genre. He is just Burial. His name alone is enough for people to say, “Yeah, him…” There is no other artist I can think of that sounds like Burial, and if so, it’s because they are trying to sound like him. The problem with that is they cannot comprehend the originality on display here. This could only come from Burial’s mind alone.

The sound is scratchy, lo-fi in some spots, but also euphoric and has a wide wealth of atmospheric ambient sounds. There are samples to be found and if you want to know what those are there is an internet hive mind of folks who have hard lined information dumps about who and what is sampled here. The sound is continuous in its rhythm, but then it does an immediate changeup and gears switched to a more syrupy drone that would not be out of line on a Massive Attack album. The use of female vocal samples also give this album a more feminine feel which was intentional and a greater departure from his self-titled debut LP which sounded more like Proto-Dubstep and Grime in the vein of producers like Horsepower Productions, Mala, Kode-9, and Skream.

Standout songs I suggest to check out are “Archangel”, “Ghost Hardware”, “In McDonald’s”, “Shell of Light”, and the title track.

Any review for this album is almost a disservice to the artist because the music itself speaks loudly and it is all right here in front of you to hear. It can either grab you or not. This is just a brief ten-year reflection on Untrue but now as I write this I can remember driving around downtown Oklahoma City one night and seeing the lights splay by like I was in Koyaanisqatsi while my cigarette smoke filtered out the crack of my windows and Burial’s music played on 11.

The Melvins: A Walk with Love & Death