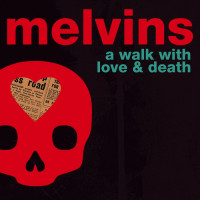 Pick any random point in the Melvins discography and you’ll find that the band places a high value on texture and nuance. “Charmicarmicat”'s entire first half is built around the interplay of quietly shifting feedback. Houdini closer “Spread Eagle Beagle” was ten solid minutes of exhibiting how drum sounds alone can create an engaging, multifaceted experience. Newer track, “Decay of Lying,” opened with a low rumble and found Buzz Osborne’s guitar, Steven McDonald’s bass, and Dale Crover’s drum each isolated and moving in contrast to the other’s color. Thus, it makes sense that on the Death segment of their first double disc album, A Walk with Love & Death, the band really puts their tactical planning, and dare I say, sonic sommelier skills, under the spotlight.

On “Edgar the Elephant” the band doesn’t so much pummel the listener as unfurl a controlled tension. As Osborne bends his guitar lines around an undulating rhythm, allowing just a smidge of distortion seep through, one is reminded of how blues guitarists would spend decades upon decades getting a bend juuuuust right. Well, Osbrone and Crover have been doing their thing for over three decades here, and it seems that they're eager to show off their control as much as their power. It’s not so much a mature sound as it is a refined one.

See “Sober-delic” and what with its twinkling, shimmering intro, it echoes back to the murky, ghostly grooves of both Pink Floyd and Led Zeppelin. As the song slowly rises with an electronic whirl zooming around the background, Crover shows that he might be a boom-bapper, but he can apply a softer touch in the name menace. Likewise, Steven McDonald who has spent the majority of his career with the AM pop loving Redd Kross, knows the importance of tone and touch as much as thee mightee riff and locks in with the two main Melvs like the a long lost triplet.

Meanwhile, with a little bit more quiet and space, Osborne really puts his abstract poetry to the forefront. Now, no doubt that Melvins lyrics are usually carefully considered and not random word salads, but Osborne usually tackles his topics from an askew angle leaving a lyric sheet that appears open to interpretation even if it may be about one specific thing. He does that here too, but with the space provided, his words really pop. “That’s the beautiful thing about remembering, it all seems natural but it don’t mean a thing” he coos. The fact is, it’s tough to actual peel apart what Osborne means by the portentous phrase, despite that it seems profound at first impact. And the fact is, it is profound in that the listener can take this cosmic knowledge and wrap it around his or her own experience. It’s easy to say “greed is bad!” over a d-beat blast, but dropping hazy nuggets like this over a twisting shade requires a much more refined hand, which by now, Osborne has mastered.

The band continues their grain experiments on Love which is a soundtrack to an as of yet unreleased short film. But, unlike Death which is based around rock structure more or less, Love is more abstract. On the disc, the band engages in all sorts of noise recording adventures. “Queen Powder Party” finds Crover slamming on his drums while Osborne layers warped tape loops and guitar experiments over the top- one is reminded of the connecting sections of The Wall. “Scooba” riffs on ‘50s jazz while the band warps the whole thing is true Melvins fashion into some dark carton pastiche. “Trackstar” and tracks like it are where the band goes the furthest and abandon traditional music all together in favor of contrasting noise itself.

Yet, none of the Love tracks come off as “Random.” Rather, just as Death finds them savoring the connectivity and space between their instruments, Love (maybe in a sort of John Cage motif?) finds the band enjoying and pointing out the harmony in the cacophony of soundclash. Not to get too academic, so it suffices to say that the band realizes that just as song structure and scales can be stimulating, so can non-musical sounds. There seems to be as much a love for sound as there is for music here- which might also suggest why the band savors mood and melody on the Death half as well.

How many albums do the Melvins have by now? 25? 26? 30 counting the collaboration releases? 40 counting their live releases? You’d think that by now, we’d know all there is to know about these misfits by now, but here we are with another one of their aspects given its due respect, despite the fact that it hovered around them this whole time. Look at it this way- people have been writing songs about love and death for, say, 10,000 years and every year someone does have something profound to say about these topics. So, maybe we shouldn’t be too surprised that after 35 years, the Melvins still have something profound to say about the Melvins… but then again, a double disc album that includes one full disc of noise experiments and one full disc of BB King level musicianship kind of was a shocker.