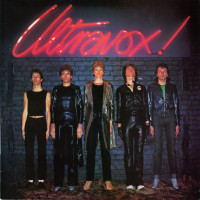 Ultravox’s debut, Ultravox!, is certainly not their most well-known work. That wouldn’t occur for another three years, and only after some significant changes to both their lineup and sound with 1980’s Vienna. Their debut, co-produced by Steve Lilywhite and Brian Eno, may be one of the forgotten debut masterpieces ever. This, likely, was caused by the change in sound after the departures of John Foxx and Robin Simon. But, everything about this album falls into the category of fully realized.

From the opening chords of “Saturday Night in the City of the Dead” the band combines the musical attack of the louder side of glam, with synthesizers, and a veracious lyrical attack on what they viewed as the decay of the society at the end of the 1970s. It was an album for a musical world in transition.

While there were predecessors to this sound, the songwriting found here captured them in new manner. While many bands were dealing with themes of alienation and the downfalls of modern society, the lyrical approach here relied on vibrant imagery and loose storytelling to get its points across, as opposed to the more nihilistic sloganeering of many of their peers engaging in the same observations. This ability to write lyrics of this nature, would likely lead to the thematic and musical change that occurred of the course of their next several albums prior to the departure of Foxx and Simon. These themes, and songwriting, were best found on tracks like "Life at Rainbow's End", "The Wild, The Beautiful, and the Damned", and "My Sex."

The album wasn’t all loud distorted glam punk though, when the band slowed things down, it was certainly obvious they had the ability to create intricate slower paced pop songs that would help fuel their synth-pop career in the years to come. This is best displayed on the albums seven minute plus centerpiece "I Want To Be A Machine."

Sadly, given the large roster of similar sounding bands that released albums, to high commercial response, in 1977 this album’s full influence is hard to gauge. Certainly the influence of their biggest charting album, and single, Vienna can be readily spoken too. But, with similar sounding records filling the shelves of record stores that year it’s hard to pin down the influence of this album. Which is a shame, because even in a saturated market the songwriting and musicianship on this album are remarkable and definitely worth revisiting.