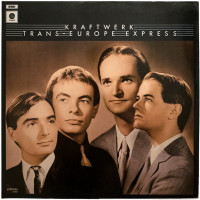 While Kraftwerk had made the switch to albums made fully on synthesizers, keyboards, and drum machines a few albums prior. Tran-Europe Express marked a change in the way they were structuring their songs. Prior to this, the band’s song writing had been rooted in the more traditional rock/pop song structures. As they embraced minimalism, more structural firm melodies, and sparse vocals that were almost always manipulated digitally. This change would make this release one of the most important albums released during the second half of the twentieth century.

The musical composition found on this album, specifically its second half, had an influence that can be heard in new wave bands like Joy Division, post-rock era Radiohead, early hip-hop artists like Afrika Bambaataa, and nearly every group placed in the category of electronic music in the past 30 years. While numerous albums released in 1977 would prove hugely influential within their respective genres, the cross-genre influence found in an album like this is a rarity in music.

The album itself, is largely a low-key affair that deals with European identity and culture; while also turning an inward looking eye at oneself. While the topics, and way they were addressed, weren’t ground breaking. The mood created around these ideas is where the album set itself apart. While alienation, cultural unity, and self-examination weren’t new concepts for music, the way this music served as a support to the lyrics was a different concept within the modern pop song. Typically, the vocals on a song would provide a melody or counter melody of their own. While there are tonal qualities to the lyrics on this album, the way they aren’t traditional pop vocals. Bands had used similar effects throughout the seventies, one need look no further than 1976’s Frampton Comes Alive for proof of that. But, an album length departure from what were considered traditional vocals in pop music hadn’t been as influential since Bob Dylan first broke into the mainstream.

Kraftwerk would remain commercially, critically, and musically relevant for much of the next decade. When many new wave and synth pop bands, think earlier Depeche Mode and Bronski Beat, would produce great records in the eighties. They never outpaced this band. They were sampled by Afrika Bambaataa on his song “Planet Rock”. And this album’s influence could even be heard in the newer sounds of artists that predated them such as Genesis, the solo works of Peter Gabriel, and to a lesser extent the solo work of Phil Collins.

There were numerous albums released in 1977, many of which were hugely influential. Few of them, have had the cross-genre influence Trans-Europe Express has had. And I will go as far as saying none of them had an entire new genre of music created in their wake. The importance of this album is on par with Kind of Blue, A Hard Day’s Night, The Velvet Underground & Nico, Ramones, or Raising Hell. Without it, an entire genre of music wouldn’t exist and the possibilities within other genres wouldn’t have been realized.

The Jam: In the City