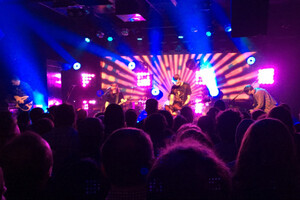 Ahh, the return of Slowdive to Boston. It was a hotly anticipated one, sold out well in advance and packing out a very cramped Paradise Rock Club on a chilly night.

L.A.’s Cherry Glazerr were a nice fit for the bill. Trying to compartmentalize them into one genre seems to do them a disservice, but it's not insane to say they play some form of manic, kinda punky indie rock. I heard all sorts of random possible influences there: Blonde Redhead, Björk, and maybe even Swirlies’ kitchen sink noise pop experiments. Though the songs might not have had the most memorable or lasting melodies or moments, the seamless blend of classic rock, psychedelia, and noisier moments were for sure impressive. Singer/guitarist Clementine Creevy was fun to watch too, with lots of personality: She’d go from subdued to screaming fits at the drop of a dime, with lots of twisted-up facial expressions selling the craziness.

Slowdive came out to Brian Eno’s “Deep Blue Day” as they are wont to do, with loud, warm and receptive cheers greeting them. They began things with their band title track from their debut EP and things were off.

The band sounded fantastic throughout the set, hardly missing a note. They sounded crisp and full of their signature, disarming atmosphere filling the venue, and the lights and different visualizers they bathed in added some pleasant, eye-catching optics. They all had great energy, but especially bassist Nick Chaplin, who struck some stark poses. The new self-titled reunion album might actually be my favorite of theirs, and naturally offered some high points in the set, from “No Longer Making Time” having a little more pep than the studio version to, of course, the time-stopping “Sugar for the Pill”. And just about any time the opening chords of a Slowdive (LP) song started, the clapping and cheers definitely seemed above-average, nearly on par with “hits” like “Alison”.

Singer/guitarist/tambourinist Rachel Goswell told a couple of great anecdotes in between some songs, like how back in the ‘90s, U.S.-Canada border crossings on tour might involve waking up on the bus/in the van to dogs sniffing them in the face. And now, it’s a slightly simpler and less threatening process of handing over a passport and getting looked up on Wikipedia.

They played a solid hour-and-a-half with songs from all over their catalog, including their beloved “Golden Hair” Syd Barrett cover. “Don’t Know Why” kicked off the encore with its Super Mario Bros. 3 level boss victory melody shortly thereafter, with “Dagger” a great penultimate ballad and “40 Days” the excellent comedown.

The Undead: Having an Undead Summer [EP]