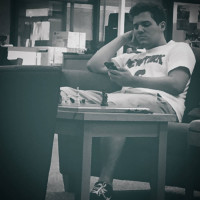 Manic Depressive is the first EP by indie popper, Thomas Bjorkstrand. Known for being in a plethora of bands, this is his first release under his own name. Assisting the product was ex-bandmate, C.J. McKenna, who plays and sings on a couple of the tracks, as well as mixed the entire EP. Thomas has grown quite a bit since his outputs in the Sensitive Nachos, James On Fire, The Natails, and his most recent failure, Riley’s Lame. His creativity on guitar has improved, and he’s also branching out in trying different song structures. Diversity is key on this release, as there’s a little bit of everything on display. Pop punk, folk punk, indie pop, emo, power pop, and overall “chill vibes” are all evident, making for a refreshing listen from front to back. From the fantastic pop punk opener, “A Mission to Destroy Mars” to the tear jerker closer of “65 Degrees,” you never know what to expect when listening to this exciting new artist. The lyrics are also always changing in style. On “Folk Song,” Thomas belts out that the folk punk crowd won’t care for his shtick, because he’s too pop punk. While on the blissfully tuneful, “Sweaterzzz,” he longs for a sweater from his ex-lover. Despite these humorous examples, he also opens up about his depression. On "A Mission to Destroy Mars," he takes witty stabs at his ex-bandmate, Xander Mars, in an emotional rampage. The personal aspect of his lyrics benefit greatly, and make everything sound much more heartfelt. There’s definitely room for structural improvement, which is evident on the cleverly titled, “Emo Song #5.” One could argue it’s a little too ambitious for its own good. It’s lacking in intensity, and each vocal section seems to be spread out awkwardly. The song ends with an epic guitar solo, but it feels rather empty with the undramatic drumming. Besides that blunder, the rest of the EP seems thought-out perfectly. Perhaps the best song is “When You’re Not Around,” an immediate pop classic that draws influence from Weezer and Twenty One Pilots. Though it might be a little too scattered for some, Manic Depression is a great introduction to Thomas Bjorkstrand. The magic is there, and you better start paying attention.