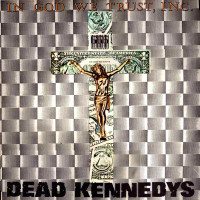 The first time I ever heard the Dead Kennedys was from a cassette with both Plastic Surgery Disasters and In God We Trust, Inc. I later bought a CD with the same track listing. Those two records will probably be forever connected in my mind, but God is certainly fully capable of standing on its own. While Fresh Fruit for Rotting Vegetables (1980) is widely considered to be DK’s masterpiece, In God We Trust, Inc. will always have a special place in many of our hearts. It was the first Dead Kennedys album to feature drummer DH Peligro and what is now considered the classic lineup.

Musically it was more aggressive than Fruit, venturing further into thrash and hardcore territory. Opener “Religious Vomit” was about as fast as anything the band had done to date. Jello’s lyrical prowess and sense of humor were on full display too. At the beginning of “Moral Majority” he plays the part of a greedy minister. Eventually he leads the congregation in a rousing hymn that also happens to be the theme song from The Mickey Mouse Club. They were able to condemn both religion and corporations in one fell swoop. “Hyperactive Child”, “Kepone Factory” and “Dog Bite” were short, angry blasts of hardcore.

Few punk songs have been covered more than “Nazi Punks Fuck Off”. The best punk songs also tend to remain the most relevant, and the message is true now more than ever. On “We’ve Got Bigger Problems Now”, the Dead Kennedys rework one of their own songs. While the original “California Uber Alles” took on California Governor Jerry Brown, the new version had President Ronald Reagan in its sights. The lounge lizard arrangement also gave a good idea of the band’s wide musical range. The cover of the country western classic “Rawhide” was a humorous and perplexing way to end the eight song, 14 minute EP.

The cover art was by Winston Smith, and it was controversial as ever. Jello later said that the image was actually the inspiration for the EP. It was a gold Christ crucified on a cross made of dollar bills. It was another masterful lampooning of religion and corporations. If you are not familiar with In God We Trust, Inc., you must seek it out. Like everything the Dead Kennedys recorded in the 80’s, it’s an essential, foundational piece of punk and hardcore. Ironically, you should probably study and memorize it like a religious zealot.