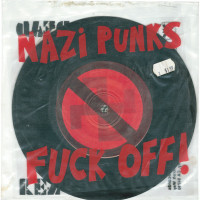 “Nazi Punks Fuck Off” was the unforgettable fifth single from the equally unforgettable Dead Kennedys. (See also “Too Drunk to Fuck”, which always made me snicker as a kid.) It was just over one minute of hardcore punk perfection. It got straight to the point, with little of their signature humor. It directly confronted the rising fascism in that early 80’s punk scene. The B-side was the much more tongue in cheek “Moral Majority”. Both songs also appeared on the In God We Trust, Inc. EP, but the single version of “Nazi Punks Fuck Off” is slightly different.

Like most of the great early punk singles, “Nazi Punks Fuck Off” has aged well. I can’t count how many times over the years I’ve seen some young punk band take a stab at it. The message has stood the test of time, and is as important now as it was in 1981. The music also sounds as fresh and angry as ever. Even as I sit here at my desk, I have to resist the urge to shout its NSFW chorus. “Nazi Punks, Nazi Punks, Nazi Punks, FUCK OFF!”. The song even managed to invade popular culture and was most recently featured in the 2015 punks vs. racist skinheads thriller The Green Room.

The original pressing included an armband with a swastika inside of the universal symbol for no. (That version is worth a fortune if it’s fully in tact.) The Dead Kennedys always had a knack for the iconic. Look how the classic DK logo has endured for several generations of punks. The “Nazi Punks Fuck Off” artwork has become the banner for international anti-fascist groups. To summarize: “Nazi Punks Fuck Off” is one of the most important and influential punk songs of all time, by one of the most important and influential punk bands of all time.