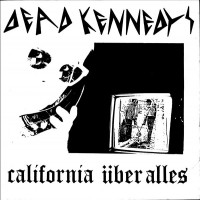 The menacing drum intro alone was enough to tell listeners that something was different about this band Dead Kennedys. The ominous crunch was then multi-layered with a counter-intuitively dark sounding surf guitar and an equally dark bass. Whereas most punk bands were picking up and picking up and picking up the speed, this band seemed to be doing their darndest to pull back on the reigns. And then came in that one-in-ten billion, high pitched, voice that seemed to sit somewhere between the tone of Vincent Price and Bryan Ferry.

Introducing himself as governor Jerry Brown over a menacing drum cadence, the singer announced his ever circling grasp on California and by virtue of that, the world only for the song to slightly pause before the whole thing slammed forward in a catchy, but razor sharp riff attack.

And so, on “California Uber Alles,” Jello Biafra was presented to the music world- a guy that seemed to be as equally delighted by ridiculing the bad men in power as actually detailing their very real threats. Throughout the track, co-written with his school pal John Greenway, Biafra demonstrated his knack for melody and his own caustic style of humor. His unique voice ram up and down a roller coaster, cracking at the top and warbling at the bottom end, playing the part of a demented ghoul that doesn’t care that people know he’s demented. (Hmmmm…. Sound familiar?)

But equally, Biafra displayed his skill as a persuader. Sure, he could have just said that “Jerry Brown and guys like him are bad!” but the punk community had heard that already 1000 times, and also, at that point, saying politicians were bad was almost common and uninspiring as counting off a song. Masterfully, Biafra on his first track, Biafra utilized an angle which he would remain fond of too this day- by inhabiting Brown’s skin, Biafra is able to provide a fresh perspective, and show how gruesome the guy and guys like him really were from the inside out. Importantly, though, instead of descending into dour faced finger waging, Biafra was able to keep the fun in the music, despite it’s heavy message. This, doubtlessly, is one of the main reasons why Dead Kennedys were able to rise above many contemporaries and followers. It’s not easy to be funny and serious at the same time, but by looking at the world as something that had spun into the absurd, Biafra was able to make them appear as one in the same.

The B-side was a bit harder to pin down and would go on to irk Biafra in later years. In contrast to the A-side’s first person perspective, “Man with the Dogs” had a bit more ambiguous bend, which would cause Biafra some annoyance in that most people didn’t seem to get what the tune was about. Anchored by a swinging, smashing riff which is them tempered into a floating haze by guitarist East Bay Ray, “Man with the Dogs” again found Biafra inhabiting a character. Though, this time, the moral isn’t as spelled Biafra. Biafra seemed to haunt a seemingly “normal” person and threatens to crack his “mask.” Was Biafra portraying the underlying sins that bother people who seem to have it all together? Was he being more literal? At the end he ran down a short lists of things that might be underneath the facade, including “pubic hair” and “cobweb air” which appeared more abstract than anything.

Rarely would Biafra opt for such surrealist imagery in his songs following this tune, focusing more on concrete descriptions. In a way, that was a shame because as “The Man with the Dogs” demonstrated, Biafra was able to create a vivid portrait even if some parts of the picture were obscured.

Some bands achieve their promise after years of slogging it out while others appear fully formed and, even more bafflingly, are able to maintain that initial spark for the duration of their career. The Dead Kennedys were one of these bands. Not only did this single signal a new type of band was born, but it also merged intellectualism, comedy, and straight up rocking into what would be not only a hallmark of the genre, but also one of the greatest records ever. No easy feat, so it’s doubly surprising how easy this band made it seem. ESSENTIAL to every collection.