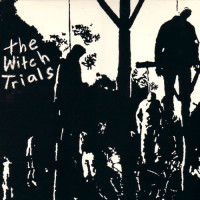 Reportedly recorded in a single four-hour improv session, the Witch Trials found Biafra diverting from his usual oeuvre, a tactic that he would utilize through to the present day. While in England, Biafra and East Bay Ray linked up with Christian Lunch and Adrian Borland of the Sound and threw down an EP unlike any of them had recorded before… and it was dark.

The base of the EP was rumbling, creepy synths and apocalyptic sound effects. Machines buzzed in the background while low quakes and cracks hovered in the atmosphere throughout both sides. With the EP’s four songs, the release nodded to the sinister, robo-bend of Throbbing Gristle, the creepy no-wave of early Residents, and even the sinister buzz of Chrome’s wildest side.

Meanwhile, Biafra took a stab at his earliest spoken word project. As the darkened instruments hissed behind him, Biafra spoke-chanted gruesome tales of assault, police takeover, and general perversion. As is his wont, Biafra seemed to revel in playing the part of the bad guy- taking very realistic bad people and blowing them up into movie monsters. What made the track so fun and so dark was that, yes, Biafra was playing the part of some real baddies here and it was fun to go on the horror ride, but also, these people that Biafra spoke through were real.

With Trials was released with little to no promotion and had almost no credits on the sleeve- implying that the release was meant more as a mysterious side project than big time “a super group combo.” In a way, that was the right move. These tracks are dark and heavy and it’s unlikely that someone expecting “Holiday in Cambodia part II” would dig this- but then again, that is often Biafra’s stratagem. Give people MORE than they can handle and make them rise to the next level.

That being said, as dark and creepy and generally strange as The Witch Trials was, it was really quite digestible. At a simplified level, the EP was relatively rhythmic synth-punk with Biafra telling ghoulish tales over the top. With its low-stakes nature, the record seemed to act as more of an experiment than a release. Could Biafra and crew take punk beyond the three-chord attack and take the genre’s philosophy to strange new dimensions? With Trials proved that they could, and taking up on that queue, Biafra would utilize this philosophy to great success with the country record recorded with Mojo Nixon, his soul recorded live in New Orleans, and even his voluminous spoken word releases. Not a bad payoff for four hours worth of work.