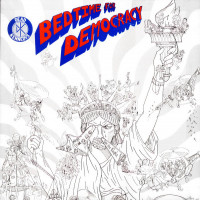 By the time their final studio album, Bedtime for Democracy, was released in November 1986, the Dead Kennedys were no longer a band. They announced their breakup in January, and played their final show (at least with Jello on vocals) in February. The title of the album was a play on the 1951 Ronald Reagan film, Bedtime for Bonzo. The album expanded on musical and lyrical themes the band had previously worked in, and would do so successfully.

The opening song, was a cover, of the David Allen Coe song “Take This Job and Shove It” which given the bands dissolution at the start of year, was likely a not so tongue in cheek nod to their decision to no longer be a band. While the song was, and still is, unlikely to appeal to David Allen Coe’s core audience; it was able to become a favorite for some Dead Kennedy’s fans and they certainly were able to show how elements of outlaw country and punk rock can make solid bed fellows. Given the breakdown that occurred between Jello Biafra and the other members of the band in the decades to come, the song now reads like a tongue in cheek statement on Jello’s behalf.

Coming off a trial for obscene album art, for the H.R. Giger insert for Frankenchrist, some may have wondered what the band was getting at with the song “Rambozo the Clown.” As it was a critique of the violent imagery found in many 1980’s action films. This is where the band walked the fine line between punk rock outrage and a more intellectual outlook on issues such as this. The band wasn’t saying these films should not exist, but rather stating films that suggest over the top violent action films being used to help define masculinity were dangerous. As was, and still is, the case with many Dead Kennedys songs the songs would come to reflect the culture and remain relevant in conversations of not only modern punk society, but American society as a whole. And while the term “toxic masculinity” is likely unsettling to some, in contemporary terms that’s what this song was about, when violent or otherwise harmful behavior becomes interchangeable with the term masculine.

The band would also begin to examine punk culture as they made their exit from it. Songs like “Chickenshit Conformist” along with “Anarchy for Sale” would not only touch on the punk scene becoming more intellectually mainstream but also the tourist nature some people coming into the punk scene were taking on. It would be easy to simplify this down to a simple word, such as poser, but that wouldn’t be doing the songs justice. The scene had begun to attract the attention of people who would have previously been at odds with the punks. This isn’t to say jocks, but definitely people who were drawn to the scene not because it challenged societal norms. But, rather they were drawn to the scene because of the nihilism and violence that came with those challenges, without any of the intellectual sacrifices that fueled those feelings.

Jello also goes after his normal targets in the form of Ronald Reagan, Reaganomics, the government as a whole, citizen’s privacy rights, and machismo. Given how accurate the predictive nature of his lyrics were, and the tinges of psychedelia, metal, rockabilly, surf rock, and straight ahead hardcore the band delved into on this album, the fact it ended up being their last proper album, truly is a shame. While Jello Biafra would continue to make strong albums both inside and outside the umbrella of punk, neither Jello nor the band would ever recapture the magic they had when they were playing together.

Even with all that heaping praise in mind, the measure of classic album is that album’s lasting influence and not the band that produced it. Nobody will ever be able to dispute the influence this band had, but when you ask people to name their favorite Dead Kennedys’ songs or you see a band cover one of their songs live. You’ll find those songs are rarely off of this album. Perhaps that’s because the band’s previous albums garnered so much attention. Perhaps, it was a band getting their last gasp of life in and using it to try as many things as they could. Whatever caused, Dead Kennedys will always be a classic punk rock band, however that did not and does not make this a classic punk rock album.