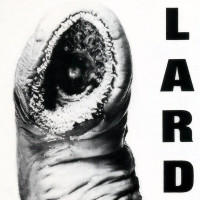 When Lard debuted in 1989 it wasn’t as much of a surprise, despite many people not expecting it. Ministry’s Al Jourgensen already collaborated with notable punk luminary Ian MacKaye (Minor Threat, Embrace), in 1987 for Pailhead. So, to see him teaming up with another well-known veteran punk rocker, Jello Biafra, seemed a natural progression for his side project ambitions. Their first release, The Power of Lard, is a 40 minute EP consisting of only three songs, and is notable for the slight differences to the earlier Pailhead project, mostly due to the influences of Biafra’s stylings.

The first song, title track “The Power of Lard,” even follows the same pattern as the first Pailhead song, “I Will Refuse”: a slow open to the song that soon builds into fast-paced frenetic energy. The rolling drums start you off, and are then joined by a Biafra and a backing group shouting of the word ‘Lard.’ Soon afterwards Biafra’s instantly recognizable voice, which oozes with no-nonsense straight-forwardness, joins in, adding his trademark lyrics which can be both politically and socially poignant, and yet mixed with random verses thrown in. Despite its ostensible purpose, this song seems designed mostly to assault the listener with music more than by Biafra’s social commentary.

Follow-up track “Hellfudge” has more of a rambling rock’n roll/country sound and is more in line with one what one would expect from a Dead Kennedys album, more then any industrial band. The song also is the most coherent storyline as Jello takes the role of a southern televangelist who, for some strange reason, can’t seem to get away from the very sin he preaches against on television. “Hellfudge” has a very different style from the lead track, which does indicate that this album is more of a collaboration of styles and not just Biafra singing over Jourgensen’s industrial musings (as Pailhead felt to me).

The final track on the album, "Time to Melt," is a 32-minute long opus (?) that, as far as I can tell, is about your narrator finally succumbing to death and being reborn.

After having three releases in quick succession between 1989 and 1990s, Lard took a break until releasing two more albums- in 1997 and 2000. As of 2017, Lard is just one aspect of the careers of Biafra and Jourgensen, both of which have enjoyed great success since. I’m sure that anyone interested in Jello have likely heard The Power of Lard, but I know quite a few Ministry fans who had no idea about it (or any of Jourgensen’s early side projects). If you haven’t checked it out, give it a go. You may like it.

Jello Biafra with D.O.A.: Last Scream of the Missing Neighbors