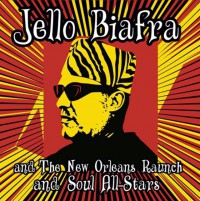 Jello Biafra and the New Orleans Raunch and Soul All-Stars

In 2011, Bill Davis of Dash Rip Rock challenged punk legend Jello Biafra to fly down to New Orleans for Jazz Fest and perform a set of New Orleans classics. Jello accepted the offer and on May 8, 2011, Jello, backed by a 10 piece band directed by Davis, ripped though two handfuls of roots, soul, blues, garage rock, and frat tunes.

The resulting album, credited to Jello Biafra and the New Orleans Raunch and Soul All-Stars, and titled Walk on Jindal’s Splinters, showcases Jello and crew at their rowdiest and most celebratory. As the band blasts through “ House of the Rising Sun,” Biafra belts out in an Animals-blues hybrid, exhibiting that, while it’s rarely mentioned, there is quite a depth of soul to Jello’s delivery. As he flexes his famous vibrato, and then drops down to the pit of his stomach, he’s feeling these songs more than performing him, in the great carnival style, and the result is something supernal. These takes don’t sound like covers, but rather, a summoning of the New Orleans spirit, in all its contradicting joy-and-misery.

You have to give credit to the backing band for this, as well. This is a New Orleans band that knows the spell book of this swamp-soul music isn’t written in exacting musicianship, but that intangible texture heard in those dusty 78s. The band strikes hard, sometimes drowning out Jello, only to drift away to almost a nothingness, making Jello sound like he’s singing a capella, despite the baseball team behind him.

But, the most striking part of this whole recording is how much fun everyone seems to be having. Pete Gordon’s PCP-addled, banging piano keys zap so fast it sounds like he can’t stop banging on the ivories. The brass section wantonly wails away, flying in and out of key -- this music is carried by the energy and enthusiasm, which really, is about as pure as music gets.

Jello is in top form. Of course, he can’t help himself by injecting a few Zappa-ish updates to a lot of the songs. “ Ooh-Poo-Pah-Doo” has a spoken interlude about getting the shits from Waffle House. When he swings through “ Mother in Law,” he seems to be having an absolute blast as he goes for a deep, doo-wop warble during the refrain. The song is as much a comedy routine as it is a jam, and Mr. Biafra plays up both aspects. Likewise, “ Workin’in a Coal Mine” is given a revelatory shake. Could Jello, a noted Devo fan, be tipping his hat to fellow weirdos who have covered this '60s tune? See also the sly Johnny Thunders/Dee Dee Ramone reference on “ Bangkok.”

Perhaps the most fascinating aspects is a few of the frat-rock covers. The group smashes out a revved up version of “ Judy in Disguise,” with Jello just dripping the final words, “ I guess I’ll just tint my glasses!” He introduces it by saying "some people call it the worst song ever." Jello's unclear on where he stands on the subject, but it certainly sounds he's pro. I mean really, doesn't a rocking, weird-ish tune distill what Jello is all about? It's strange to think of Jello as being influenced by AM radio rock -- he’s often poster boy for alternative music. But, as is often through Jello covers, he reveals himself more through other people’s work than his own (see his Deviants cover). Though, it’s fitting that, when these musicians just let it loose, don’t worry so much about the posterity of sound recordings, and just live in the moment, we get to see who they truly are.

This record is a blast.

Jello Biafra with NoMeansNo: The Sky is Falling and I Want My Mommy

Jello Biafra and the Guantanamo School: The Audacity Of Hype