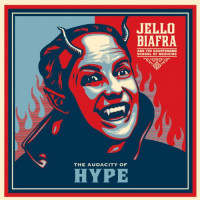 Jello Biafra and the Guantanamo School of Medicine

If you were an elected official — even if you were Barack Obama, you were not safe from Jello Biafra (as proven by the title of this record and album cover). Republican or Democrat, left, right or center — you should have considered yourself in his crosshairs. The Audacity Of Hype was an important album on two fronts. First it was Jello Biafra and the Guantanamo School of Medicine’s first album and second, it was Jello Biafra’s first attempt (excluding some collaborations with other notable bands) at taking his style of punk rock and tackling what he saw as the big issues of the 21st century.

With nine songs that came in at just under an hour long you got more than enough of an introduction to Jello and the GSM. Right off the bat you could tell that Jello had not lost his ability to be one of the greatest vocalist and frontmen in punk rock. After several decades since the Dead Kennedy’s began, he was still about to emote his lyrics extremely well. Though this is arguably an Obama-era punk album The Audacity Of Hype the first track “The Terror Of Tiny Town” is a bit of a goodbye and review of the Bush Administration and the lyrics let you know exactly how Jello felt about that, but still he managed to incorporate some of his funny and sarcastic lyrics in it (and through out the album).

On the musical side the track the economically-focused “New Feudalism” is a major stand-out track on this record. The blaring and rowdy guitars came bursting out at you right away followed by a slightly higher than normal vocals from Biafra. “Clean As A Thistle” started out with this trippy and messy intro and the way the bass and guitar sort of shadowed Biafra’s voice in the chorus was a very cool addition. It the ultra-close attention to detail that made this band very unique.

Judging by the very clever lyrics and musicianship it was very clear that Jello had not lost his touch and that it was very clearly not the Dead Kennedys. It was a positive thing that the GSM was not a clone of his first band. That is to say though that this record didn’t have its flaws. The main one being that at times it tended to drag on a bit at certain sections. Some tracks like “I Won’t Give Up” and “Electronic Plantation” while they are enjoyable, they could have easily been trimmed down.

Seeing as how this record is just eight years old it is sort of hard to tell how well it will compare to the rest of Jello’s discography right now. It is not as much of a game changer as say Fresh Fruit For Rotting Vegetables was, but it’s not fair to expect a new band to “hit a grand slam” on their first attempt. As this album ages I think it will be considered a major piece of post-Bush era punk rock.