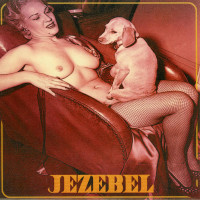 When asked to contribute a song to a Reverend Horton Heat tribute compilation, Jello Biafra, being the music maniac that he is, decided to record not one, but two tracks, and on top of that, stacked the release with a double nuance, if you will…

For the 7-inch, Biafra called up his old pals the Zen Guerillas and had them utilize a straight forward, hock rocking approach. A-side “Jezebel” tore forward in blitz of buzzing feedback and crackling amps. In fact, the tract was so skuzzy sounding that it had the warm tone of those 60s garage recordings despite the bands aggression- as skillful and meticulous as that was, mind you.

Biafra was clearly having a ball, undulating from a howling wolf-man in the first portion until he reverted to an almost post-war crooner in the bridge, exemplifying Biafra’s skill at in-song performance art. An that bridge allowed the track to act as a triple-tribute of sorts. While the tune is a RHH classic, it was written by Wayne Shanklin and recorded hundreds of times, including by Frankie Layne. Even moreso, Biafra first became aware of the song through the cover by early West coast punkers The Controllers. Both RHH and the Controllers often omitted the ghostly brdge from the tune, so by recording the track, Biafra saluted the maniacal skills of RHH and his ability to resurrect songs, his old friends the Controllers, and the songwriting skills of Shanklin himself. Not bad for a mere four minutes.

The flipside found Biafra’s record collecting obsession coming to the forefront. Instead of recording a second RHH classic, Biafra found an obscure track which was originally tossed in the middle of a long forgotten comp. Biafra’s cover of “Speed Demon” showed that it was time to dust off the tune. As the Zen Guerillas blasted forward at top speed, Biafra merged his own style with the thwomp-a-thwomp of ‘50s country. What made the track doubly interesting is that it found Biafra wooo-wooo-ing at a captivating, if dangerous woman. Rarely does Biafra tackle romantic concepts on his releases, be them from the heart-break or hound-dog angle, so the track played double duty by giving Biafra a new field to let loose in.

The whole release capped off with a series of photos that connected together in a theme when viewed in linear fashion. If anything this, 7-inch showed that with Biafra, everything is considered and nothing is tossed off. But on top of that, there’s more to Biafra than meets the idea and the layers of innuendo, reference, and homage on this release only hint at what can be dissected from his albums proper. Not bad for “just a tribute.”

Jello Biafra and the Guantanamo School of Medicine: The Audacity Of Hype

Jello Biafra and the Melvins: Never Breathe What You Can't See