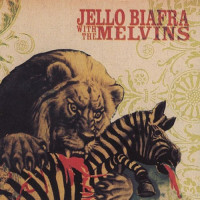 Jello Biafra and the Melvins

Shortly after the “Dead Kennedys” reformed without Jello Biafra, Buzz Osborne of the Melvins approached Biafra. Osborne felt that it was wrong for the remaining DKs to be playing Biafra’s compositions without Biafra on the mic, and wanted to see if the singer wanted to tour with a DK set to reassert his contribution to the band… and to protect the band against tarnishing.

But, Jello was never one to do something “a little bit” when he could do it TO THE MAXIMUM LEVEL. So, instead of trotting out an oldies set, Jello decided that he wanted to record an entire new album of new songs with the Melvins as his band. And of course, since Jello did everything to the nth degree, the unit ended up recording roughly TWO whole albums of music, the first being Never Breathe What You Can’t See.

The fact is, most supergroups aren’t so super, especially when they are put together as some sort of a project instead of a band that naturally comes together. So, it was a good thing that both Biafra and the Melvins were experienced at taking on new projects with new angles and doing it all with a bit of whimsy.

Considering the album’s background, it’s surprising that not only was it a great album, it ended up being one of Biafra’s strongest. Biafra was clearly having a ball, relishing in applying a Mad magazine façade to heavy topics- terrorism, berserk capitalism, getting groped at the airport. “Yuppie Cadillac” found Biafra slashing at “the upper crust” by assuming that very identity, howling out “Yuppie Cadillac!” with demented glee as he ran down people’s kids on his way to wine boutique. “The Lighter Side of Global Terrorism” found Biafra describing the daily perverted thrills of airport security all while pointing out that they don’t actually seem to prevent very much. “McGruff the Crime Dog” had one of Biafra’s finest moments as he growled and spat into the microphone.

All that being said, this album wasn’t merely just laughs. Biafra’s work often appeared to focus on the outside word and how he perceived them. Less common was Biafra looking inward and telling us how he feels, instead of what is making him feel. “Enchanted Thoughtfist” was one of the most moving pieces he has ever written. Buzz Osborne set the tone for the track with a soaring, but somewhat melancholy guitar line while Biafra came in with “I am a product of the television age…” But, unlike most of his songs where he issued howled decrees in a mixture of rage and hilarity, here, Biafra had an almost mournful tone, approaching the reflective, yet coldly objective tone of crooners like Peter Murphy or even M. Bowie himself . It was particularly revealing when he detailed his self-doubt upon meeting Allen Ginsberg. We often got the all-guns-blazing Biafra, but much more rare was the Biafra who paused to ponder and question himself.

And we all know it, Biafra is a handful. On his records, he exploded back and forth, ripping through tracks in a Gatling gun fire of decees, quips, and attacks. A titanic band in its own right was required to not only match this fire, but also to build around Biafra’s snapping cadence. The Melvins were that band. Throughout his career, Biafra had been rooted in punk, but, he also seemed to want to avoid the cliché of punk. The Melvins, who took punk to its lowest, heaviest extreme, all while engaging in fanciful and simply weird experiments, were the perfect foil for Biafra.

Wisely, Buzz Osborne kept his guitar in full rocker mode, slashing out perfectly feedbacked guitar lines that stormed forward with the energy of hardcore, but had that inherent swing of first wave punk. Drummer Dale Crover kept it hard and simple, blasting the whole thing forward in order to give Biafra both the space and power that Biafra used so well as a base. Kevin Rutmanis, in his last stint as a full fledged Melvin, met Osborne’s hard strike with a hard strike of his own, forging a sound that was equally indebted to the gun slinging of the Stooges and the electric storm of Plastic Surgery Disasters.

And, while that dedication to classic punk and hard rock was necessary perhaps where they shined brightest was when they broke from the template. “Dawn of the Locusts” had the wonderful creep and slither of classic Alice Cooper. “Islamic Bomb” seemed to have a slight homage to big band music with Crover whomp-awhompa-whompa drumming (nice too that Osborne added in warped surf guitars, too). And we must again bring notice to “Enchanted Thoughtfist” where singer and band met at the exact same difficult to obtain melancholic tone, resulting in a track that was as moving as anything else that you could find.

Most supergroups- hell most GROUPS- fail in their initial stage, which is why it’s so surprising, and so special when a supergroup lives up to its pedigree. Jello and the Melvins, or the Jelvins as they were dubbed by fans, were one of the rarified groups

that executed what their parts suggested. What was most apparent about this supergroup was how, they were not motivated by ego or aimlessness, but by how much fire they all had in their souls to do what they did. So, maybe it’s not so surpring that Never Breathe What You Can’t See wound up being one of the finest releases by both halves of the equation. This was the result of four great minds working in tandem, on the same page, with a pure motive. Albums like this don’t come around that often so it’s good that Biafra had the sense… or lack of sense… to smash out two full lengths instead of pausing to see if the whole thing made sense. Once it was all spilled out on the floor, not only did it make sense, but it was profound.