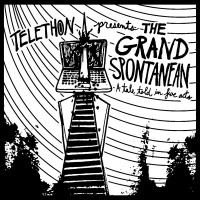 I’ve been putting this review off for too long now. At this point, I’ve spent a good quarter of 2017 with The Grand Spontanean, but its sheer magnitude has made putting pen to paper extremely daunting. What I mean to say is, there is a lot to unpack here. This record clocks in at just under an hour and a half, and tells the story of the apocalypse with the context of the modern age, complete with a diverse array of instrumental arrangements, a choose-your-own-adventure style finale, and an impressive cast of guest vocalists.

The notion of creating a record like this isn’t groundbreaking; plenty of punk fusion acts, from Titus Andronicus to Green Day, have tried their hand at musical epics in the same vein, but The Grand Spontanean doesn't sacrifice the quality of its singles, for the sake pushing the larger theme. Rock operas have become notorious for inflating themselves to the point where the music itself comes out hollow, but the album’s appeal is not reliant on the scrutiny of the listener. Every now and then, the band will employ samples to convey crucial details, which are typically delivered over ethereal soundscapes, as to not become dry divergences from the music. Still, the majority of this story is told through lyrics, and there’s a refreshing lack of ambiguity for a project of this disposition.

To help organize this colossal production, the band has spliced the record into five parts, (averaging about five songs each). The first act, entitled Bad Reputation (tracks 1 through 8), serves as an introduction to, as well as a psychoanalysis of, our nameless protagonist. That said, this act is certainly the most independent of the story. Because Bad Reputation generally deals with more universal themes, many of its singles work just as well out of the broader context, as they do within it.

The Grand Spontanean comes out swinging with four of its strongest singles. Following the minute long introductory instrumental, “The Signal,” the Telethon launches into the album’s spiritual opener, “Apocalypse When”. “Apocalypse When” sets the scene through the band’s distinct brand of blues infused pop punk. This is immediately succeeded by my personal introduction to the band, “Succinct the Optimist”. “Succinct the Optimist” is power pop romp, compositionally centered around an instantly memorable guitar lick and some vivid Motion City Soundtrack-style synth embellishments. Finally, there’s “Doctor”. This was a sleeper single for me, but upon further listens, but I’ve found it to be a nice change of pace from the more driving nature of the pieces preceding it. Furthermore, “Doctor” establishes the “anger, sadness, rage, and crying” montra, anthemically reprised during “On Companionship”.

“The Paranoid Blur” has fluctuated as my favorite moment on this record. It’s certainly where the band’s perpetual Rosenstockean influences (which attracted me to their music in the first place) are most concentrated. Not only do they flawlessly pull off that trademark Bomb The Music Industry! synth-ska sound, but by the time the arrangement shifts to its lofty chorus, the strong effect of Worry. on the track’s writing process becomes evident.

These influences resurface a couple tracks later on “Punctuation!”: the opener to act two, Cold Sweat (tracks 9 through 14). Cold Sweat is less thematically autonomous, as it details the main protagonist learning of, and reconciling with, the impending end of the world. “Punctuation!” is a thrilling way to get things rolling.

Part of what love about this song is the way that the band accents their punchy pop punk sound with some restrained use of glockenspiel. Aside from the occasional excess exhibited by Crazy and the Brains, I’ve always thought percussive idiophones to be an underutilized device in the more raw corners of modern pop punk, and “Punctuation!” is certainly an example of a track that’s enhanced by this colorful accessory.

From that lively reintroduction, Telethon goes into one of the album’s most monumental efforts, “Wrung”. Just surpassing the eight minute mark, “Wrung” is the first of The Grand Spontanean’s two epics. Though its first 30 seconds consist of a slow hypnotic sway, “Wrung”’s serenity promptly dissolves to give way to a more upbeat verse, which is pretty minimalist aside from the epic horn arrangements. Over the ensuing few minutes, the song simmers in a slow build, ever so slightly gaining momentum, until it finally bursts into a vibrant guitar solo. This drives the shift into phase two: a batch of driving verses, culminating in some soaring gang vocal passages.

From there, Cold Sweat maintains a somewhat low profile, until its closing reprisal of Bad Reputation’s finale, “The Page at the End of The Internet”.

Though The Grand Spontanean is an enjoyable listen regardless of whether you choose to follow the story, listeners are certainly rewarded most heavily for following along in act three, Fight or Fall (tracks 14 through 20), as it sees the band utilizing the concept’s creative potential to its fullest.

“Underture” serves as a quick recap of the events from disc one. The band executes this by employing a newscast sample to bring the audience up to speed, plotwise. They then embark on a musical synopsis of the most noteworthy moments from disc one, as well as a couple of passages foreshadowing moments from later acts.

Thereafter, “Temporary” furthers the narrative with humanity’s cynically chipper acceptance of its impending end. “Temporary” clocks in at just over two minutes: a stark contrast to the subsequent goliath, “Stillwave”.

To be completely honest, I was somewhat indifferent on “Stillwave”’s slow acoustic intro the first time I heard it; I couldn’t help but observe its resemblance to one of the generic hits of pop’s Mumford phase a few years back. But “Stillwave” definitely overcame my first impression of it by demonstrating rich, lyrical chronicling, and dynamic compositional fluidity. I love how the chaos of the riots is depicted with one of the most sonically reserved moments on the record thus far; it creates an aura of apathy, as if to portray humanity’s savage descent as more of an inevitable truth than an uncalled for break in character. It’s not until our protagonist decides to escape this hysteria that the instrumentation picks up, relocating the scene to the decrepit remains of Disneyland.

“Stillwave” goes on to paint vivid images of Disneyland as a barren hellscape, with clever lines describing the ironic means of destruction for various park features, like the subtle reveal that the Tomorrowland sign been vandalized to read, “No Tomorrowland”. This passage of beautiful lyrical illustrations is suddenly disrupted by the introduction of “the leader of the Troops” (voiced by Chris Farren), an eccentric, yet cryptic, figure, who conducts a tour of the theme park’s dark underbelly, from which our lead promptly cuts loose.

This flows flawlessly into “The Improbable New Sensations,” where the protagonist stumbles across Walt Disney’s personal apartment above the Disneyland fire station (which actually exists), now converted to a DIY punk venue. There, we are introduced to a band of the same name is getting ready to start a show. The next three songs exist as part of The Improbable New Sensations’ set, and, aside from just being genuinely solid ska punk songs, this sequence serves as an innovative narrative mechanism that provides a much more accessible depth to the story, for listeners that don’t want to research every meticulous detail provided about Disneyland in “Stillwave”.

Act four, Running Back (tracks 21 through 26) opens with our protagonist making their way back to Violet, the love interest alluded to during act one in “Flatpack”. After the infectiously upbeat, “Runner’s High” -- a piece of dark comedy in which the protagonist finds himself in possession of a semi truck, passed down from a driver who has thrown himself off a cliff (voiced, in his suicide note, by Less Than Jake’s Roger Lima) -- and a reading from Franz Kafka’s “A Sudden Walk,” complimented with a pleasant accordion accompaniment, listeners are treated to the record’s crown jewel, “On Companionship”.

“On Companionship” was the second single to be released from this album, and, much like co-highlight, “Stillwave,” it didn’t do all too much for me upon first listen; of the three tracks available to stream in the lead up to The Grand Spontanean’s full release, this one is certainly the most tame, but there’s a lot more to the track than meets the eye.

“On Companionship” explodes out of a short lived rendition of Carly Simon’s “Nobody Does It Better” to an anthemic duet between the vocalist, Kevin Tulley and Laura Stevenson (the voice of Violet). But even in this powerful moment, where a traditional musical might just give in to an unwarranted reconciliation, the band preserves the story’s more realistic emotional tone. Instead, the main characters to settle for awkward acceptance of each other’s presence, and it honestly makes for a more gracious conclusion. Because listeners aren’t forced to form an abrupt emotional attachment to this relationship, the sentiment of just needing companionship amongst the mayhem of the rest of the world comes through stronger.

Before I continue, I should mention that, though I have provided a vague synopsis up until this point, there is a twist ending that I would be remiss not to mention, so I’d urge you to skip to the final paragraph of my review if you wish to avoid spoilers.

“Dick Clark’s New Year’s Rockin’ Eve” is The Grand Spontanean’s high octane culmination. In this lively Epifat-style skate punk banger, the world counts down the seconds to its impending demise… to no avail; as the ensuing narration puts it, “the apocalypse was a dud”.

The final act, Remembering (tracks 27 through 30) is the shortest of the crop, but it’s a hot contender for my favorite. Telethon packs their biggest punch in the eleventh hour of the record with a choose-your-own adventure finale. The two possible closers, “Firebrand” and “Fruit Bat,” provide unique perspectives on the implications of recuperation. In terms of quality, both singles are neck and neck; lyrically, as well as musically, it’s hard to pick a favorite.

Overall, The Grand Spontanean is likely the most painfully overlooked LP of 2017. It’s ambitious and takes risks, but succeeds at virtually everything it attempts. Part of this has to do with the fact that, for its heavy subject matter and occasional dark themes, it’s a pretty overwhelmingly whimsical listen. It’s well produced, but subtleties like the audible snares vibrating before the drums kick in on “Dick Clark’s New Year’s Rockin’ Eve,” or the faint count-offs scattered in help to maintain a consistently raw and intimate feel across the record. Whether you’re inclined to invest yourself in the engrossing story, or just looking for some some fresh ideas in the pop punk realm, this record is assuredly worth your time.

Ceremony / Nothing: live in Cambridge