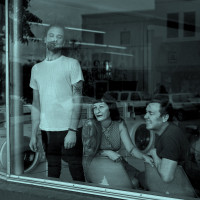 A couple of months ago indie-punk band Lemuria put a pre-order up for a ‘secret album.’ Then, mid-way through December, they announced that it was actually their brand new full-length. Recreational Hate is the band’s fourth album, and a nice end of year surprise.

The band’s last album The Distance is so Big was released four years ago, but they’ve since spent a good portion of time touring for the anniversary of their (almost perfect) debut, Get Better, so comparisons to the latter seem only natural. Parts of Recreational Hate hearken back to Get Better, such as the excellent intertwining vocal melodies of guitarist Sheena Ozzella and drummer Alex Kerns on tracks such as “More Tunnel” and “I Wanted to be Yours” which are reminiscent of older tracks like “Wardrobe” and “Yesterday’s Lunch”.

Where Recreational Hate differs is in its tight control and focus. Sure, this has always been present, but this album sees the band trim down anything unnecessary, leaving the audience with ten strong, well-structured songs in under half an hour. This is helped by the band's tight rhythm section, as Kerns and bassist Max Gregor keep things tightly locked in. Yet, there’s still room to experiment, particularly on tracks like “Kicking In” which begins with a rocky riff, later getting scuzzier and weirder, before it calms down and rests into a country-twinged slow jam. There’s also a wealth of instrumentation on this record, too - horns even make an appearance! Synth is used on “More Tunnel,” with piano on the haunting “Lake Below” and “Trembling”, which also features slide and acoustic guitars.

Where the album may disappoint is in its calmer nature, but that’s not necessarily a detraction. For comparison, there's no loud first song, like Get Better’s “Pants”. Rather, the album opens with the quiet, slightly dark “Timber Together” which is almost reminiscent of Hop Along’s “Some Grace”. There’s nothing on this album like “Dogs” and it doesn’t end with a big, loud song like “Mechanical” or “Ruby”. In fact, closer "Best Extra" is one of the album's missteps as it falls slightly flat.

What this album does extremely well is slowly build which allows the subtleties to really shine through, particularly the aforementioned additional instrumentation or any change in tempo. Then, when the pace picks up on the penultimate “Marigold” it’s really noticeable. "Marigold" is probably the highlight of the album with its memorable, catchy chorus which Ozzella absolutely nails. Recreational Hate sees Lemuria build on their strong song-writing capabilities, and use every tool available to them to the best effect. It may not reach classic-status like their debut, but it’s certainly a good fourth album.