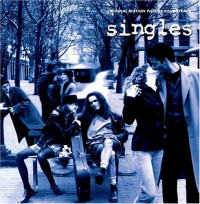 My pick for best reissue of 2017 is Singles: Original Motion Picture Soundtrack.

I have long awaited this reissue. Original 1992 vinyl copies are rare and secondhand prices very high, but here now we have a terrific deluxe package on two crisp weighty records that spread the tracks across four sides and allow some breathing room between songs. It sounds magnificent and worth the 25 year long wait.

Think of this album as a Grunge greatest hits I guess. This was a huge seller back in 1992 (released three months before the film), but in the history of the Pacific Northwest scene, older and more selective compilations came out that carry more historical significant hindsight, in particular the Sub Pop 100 and 200 comps as well as the Deep Six comp. Those three albums pretty much had the finger on the pulse of an emerging scene, not only focusing on what was to become known as Grunge music, but also Punk, Hardcore, Metal, and the obscure.

The soundtrack to the film Singles was mostly likely worked on by the director of the film Cameron Crowe, who happened to be good friends with many of the Seattle groups of the time like Pearl Jam and Soundgarden. Just like in the film, there is a sense of comradery, relationships, and an overall mood of youthful exuberance. Thinking back on it in 2017, it is sorta sad for me honestly. There is also a sense of loss associated with this music.

You see, I guess I can say that Grunge was my first taste of mainstream music that took hold. It was also the last form of mainstream music my parents dove into before they stopped caring. Therefore, I grew up hearing Pearl Jam, Soundgarden, Alice in Chains, Nirvana, and even later acts like Stone Temple Pilots. What’s connects all those bands together besides their style of music? The word is death… All those bands with the exception of Pearl Jam have had their lead singer die and each one was tragedy after tragedy. You can even add in Mother Love Bone’s Andrew Wood who was the first one from the scene to pass away and at a very young age.

Not to bog this review down with a depressing thought, I do not mean to do that, I must reflect a bit on this storied past of a particular time and place otherwise what is the point in revisiting history if you leave out certain parts? However, with the weight now out of my head and written on here now, let us focus on this incredible selection track-by-track of Seattle’s best.

Alice in Chains start things off right with their heavy track, “Would?” which came off their second and best album, Dirt. It is powerful and has a weighty presence once it gets rolling. Layne Stanley had this very raspy voice that I always liked and found very unique. It always gave AiC’s music a grittiness and honesty, which always seemed to translate into personal pain being sung. What we know now about Lane Stanley is heartbreaking and on this track, among the many others AiC made, you get a good understanding of what the man was feeling.

Pearl Jam come second and make their first of two appearances with the song “Breathe”. One of the early songs of PJ’s discography, this track could only found on this soundtrack and random B-side collections. This was for most folks, an early glimpse of PJ besides the classic Temple of the Dog song, “Hunger Strike” which featured Eddie Vedder for the first time singing. “Breathe” has that early, jammy PJ sound and wouldn’t have been out of place on their debut album Ten. Not a bad track really.

Those lyrics were written by Chris Cornell who brings the third and arguably best track on the album called “Seasons”. Cornell's contribution to the soundtrack came about as a fictional solo cassette made by the character Cliff Poncier, played by Matt Dillon after parting with his band, Citizen Dick (go watch the film…). Cornell took it upon himself to actually write songs for the tape, one of which was this reflective folk ballad. This would later be released on an EP by Cornell called Poncier.

Paul Westerburg comes next with the upbeat and catchy track “Dyslexic Heart”. Westerburg is a Minneapolis man and this song was his first solo work after The Replacements broke up. He’s not from Seattle, but his music fits in very well. The song is very catchy and one of the albums centerpieces, especially in the promotional material (there’s a music video out there for it). It might seem a bit cheesy, but after several listens it becomes rather great and the album would not be the same without its presence.

Ann and Nancy Wilson of old school rockers Heart put together an all-acoustic band called The Lovemongers during some time off from their normal touring routine and they bring with them a decent cover of “The Battle of Evermore” by Led Zeppelin. It is an ok cover but for a Zep song, I would have chosen something a bit mellower. This one tends to drag and bit and since it is not the Zep original it loses a lot of its flavor. I usually skip this one.

“Chloe Dancer/Crown of Thorns” by Mother Love Bone is pretty much the album centerpiece and it is a haunting, moody, and very heart wrenching song. MLB, formed from members of legendary bands Green River, Skinyard, and Malfunkshun, are considered to be one of the premier Seattle bands who were on the verge of exploding into the mainstream. They had so much potential and front man Andrew Wood was a terrific singer with tons of passion and energy in his voice. His passing weighed heavily not just for the band, but the scene itself. Many artists came forward with tributes for Wood and the remaining members of MLB along with Cornell formed Temple of the Dog, done as a dedication. Afterwards remaining members Jeff Armet and Stone Gossard joined up with Mike McCready and Eddie Vedder to form Pearl Jam while Cornell went along with Soundgarden to great heights.

Speaking of, Soundgarden come roaring next with the groovy, sped up Back Sabbath inspired song “Birth Ritual”. For those who never liked the Grunge scene or the music that accompanied it, there seemed to always be a soft spot for Soundgarden because they could actually rock out. I have always considered them to be a Metal band and the Black Sabbath inspiration was always there, front and center, but not done to the point of plagiarism. Instead, the band took that inspiration, along with others like Butthole Surfers and UK Post-Punk, and formed as a mutant showcase. The band would also play alternative style tunings and used Drop-D and unorthodox time signatures in some of their more well known songs which would be influential to later artists, of course...

Pearl Jam come back for their second round with the track “State of Love and Trust” which has proved to be a very popular rarity that hardcore fans always appreciate when played live to this day. It’s an ok song, but for a B-side/rarity PJ song, of which there are so many, it doesn’t touch the profoundness of tracks like “Yellow Ledbetter”, “I Got Id”, and “Leatherman”.

Sloppy garage rockers Mudhoney bring forth a crushing track called “Overblown”. It’s quite catchy and has their usual flare of snotty bratty noise which is a nice departure from some of the more serious tones the album showcases. Mudhoney are another Seattle band that were always there in the scene but did not get quite the same amount of attention as the others. They are still playing to this day and well respected regardless.

Mr. Westerburg gets another cut on the album called “Waiting for Somebody” which was used for the opening credits. If a film can evoke a mood, or display a location with a great track I applaud it. In the 1975 film, Dog Day Afternoon by Sidney Lumet, the opening scene uses the song “Amoreena” by Elton John to great effect. Cameron Crowe does the same thing in this film that gives the city much love. Panoramic shots of buildings and people strumming about their daily lives, night club traffic, an awesome live performance by Alice in Chain which shows Layne Stanley rocking out like a crazy person, coffee etc. There is also a great shot of some graffiti with Mother Love Bone written on a wall that is cut short just before the word Bone is shown, which I am sure made people curious as to what a Mother Love Bone is or was. This song, along with “Dyslexic Heart” would not have felt out of place on a later day Replacements album. It’s my favorite of the two tracks and brings good vibes while jamming.

Closing out the three remaining tracks is guitar god himself, Jimmy Hendrix, a Seattle original. “May This Be Love” is a springy, guitar chord washed track that is both very pretty and relaxing. Jimmy’s improvisation, which was smartly recorded for the official release, is splendid and soothing. I cannot fault the man for anything because he really was a maestro behind his axe. An inspiration, an original, a talent, a legend.

Now here is the low point for the soundtrack for me. I do not like Screaming Trees at all honestly, except that they have a great band name. “Nearly Lost You” falls in line with other one hit Grunge songs that came later from popcorn farts like Candlebox, Collective Soul and the 2000’s awfulness of Puddle of Mudd, Creed, and the dead horse of a band, Knickleback. Skip…

Finally, we come to the end and what I consider to be the best track of them all, “Drown” by Smashing Pumpkins. No, this band was not from Seattle, but by way of Chicago. Around the time this song came out, they had released their debut album Gish in 1991 and were on the rise in their career, eventually achieving mainstream success with their follow-up, Siamese Dream. Still, they were one of the Seattle’s friends and had a leg up by releasing their second single, “Tristessa” on Sub Pop. If there were, one reason to own this fantastic soundtrack it would be for this song alone. For a very long time, outside of a later Smashing Pumpkins greatest hits comp and the single cd release, you could not get this song on vinyl unless you paid big bucks for the original vinyl release. “Drown” would have been commercially released as a single since it was being played on radio stations at the time, but their label released the soundtrack chose Screaming Trees instead… Regardless of that nonsense, you get the full cut of the song and I mean FULL CUT. It’s the glorious nearly nine minute guitar feedback drenched single. It always love it when bands do a whole eargasmic wash of guitar feedback, and bands like Sonic Youth often did that to great expense of the song itself, but here it’s perfect alternative fuzz. 100 stars for this one song.

And here’s the end, but not to forget, this special edition re-release of the vinyl also came with a bonus cd that is filled with tons of exclusives that couldn’t fit on the original. I’m talking lots of demos, two more tracks from Westerburg, an almost entire ep from Cornell an some great tunes from other Seattle bands like Truly, Blood Circus, and the fictional band, Citizen Dick.

As 2017 closes, I thought a lot about what my re-issue of the year was going to be and without question, as soon as this album was announced, I knew it then. Singles: Original Motion Picture Soundtrack is a great release and a time capsule to something that started with the right intentions of just loving life, loving music, loving coffee, and being young.