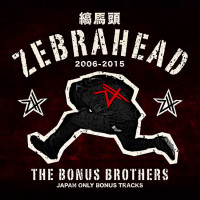 I explained how Zebrahead got to where they are now in my review of their last LP, Walk the Plank, but here’s the recap: Zebrahead first came up around the time the rap-rock trend was starting to gain popularity. Had the genre remained viable, Zebrahead probably would have ushered in the pop-punk phase of the rap-rock movement as a successor and compliment to the rap-metal phase. What went wrong was Limp Bizkit’s third and fourth albums, which were so atrocious it made the whole genre toxic and everyone who had been involved with it found some way to distance themselves from it or reinvent themselves. Why do you think Kid Rock started playing country music? Zebrahead’s chances at stardom in their home country of America were shot, but they managed to find a good deal of success overseas, particularly in Germany and Japan, which is why they’ve put out so many albums despite being virtual unknowns in their home country. They paid tribute to their adopted home of Germany with their 2014 live album, Way More Beer, which recorded in that country. Their latest release, the perplexingly titled The Bonus Brothers pays tribute to their other adopted homeland by compiling a collection of bonus tracks from Japanese editions of their albums from 2006 to 2015. That covers the entire span of time that their second lead singer, Matty Lewis, has been in the band and leaves out all of the material featuring original lead singer Justin Mauriello, who left Zebrahead to start a band called I Hate Kate, which was later renamed to Darling Thieves.

Zebrahead is purely a guilty pleasure for pretty much everyone. They play the most commercial friendly version of pop-punk imaginable, and as the definition of commercial pop-punk has changed over the years, Zebrahead has adapted to whatever the new definition is. When Blink-182 was the be-all-end-all of pop-punk, that’s what they sounded like. When it shifted more towards Fall Out Boy and Rise Against, that’s the direction that Zebrahead started to shift in as well. They’re hardly the best of songwriters, either. They mostly stick to party music and generic love songs. Whenever they try to tackle anything more serious than that, they handle it with all the grace of a drunken yeti. But what The Bonus Brothers (God I hate that album title) demonstrates is that, while they’ve never gotten to the point of being “great” or even “very good,” they’ve shown vast improvement from their earliest days, particularly after the change in lead singers from Mauriello to Lewis.

Apparently they’ve been saving some of their best material for Japan, because a lot of the tracks on here are better than the tracks that made it onto the albums proper. There are actually songs here that have enough nuance to them that I can’t tell you what they’re about from the first listen. There’s no songs I can say that about from the Mauriello era. However, the biggest flaw of the album is that, while Zebrahead has gotten better over the years, this collection goes in reverse chronological order, starting with their latest release (Walk the Plank) and ending with their first release with Lewis (Broadcast to the World). The result is, of course, an album that starts somewhat strong and gets progressively worse as it goes on. The highlight of the album is the Devo-inspired “Dance Sucka!”, although the song chooses a very odd point to fade out, and left me expecting the song to return after the fade out, but it never did. A few songs like “Down Without a Fight” demonstrate a skill that rapper Ali Tabatabaee picked up around the time of the fall of the rap-rock genre: disguising his raps as shouted rock lyrics, and demonstrating that there’s a thin line between the two to begin with.

I feel like whenever I compliment Zebrahead, I have to remind you multiple times that it might be enjoyable, but it’s not actually good, lest someone think my taste is bad enough to unironically enjoy Zebrahead. But as guilty of a pleasure as it is, The Bonus Brothers (still hate that name) is actually the closest that Zebrahead has ever putting out genuine quality material, and that’s probably the highest praise you’ll ever see me bestow on Zebrahead.