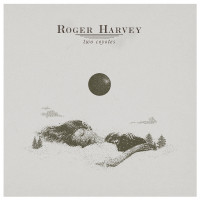 There’s a feeling you get driving around the place where you grew up. As you pass the spots that made you, that feeling floods the senses. Really, it’s a mix of feelings. Sometimes it’s nostalgia directed at how you survived the trappings of your family and neighborhood. Other times it’s anger at the letdown of youth’s promises and life’s careless drudge forwards. At some point, it’s acceptance and begrudging gratitude that it wasn’t worse. Roger Harvey’s sophomore release Two Coyotes covers all this in album that unpacks current existence.

Two Coyotes opens with “Holidays”, a lament on returning home for religious holidays, detailing how you arrived at this moment. Harvey sings about finding freedom in escape, alienation, and life in digital. He wispily reflects over strummed acoustics on modern life as a millennial troubadour. The hazy twinkle and plod of the music is the perfect match to his singing. Two Coyotes is a combination of alt-country, indie rock, and emo, not unlike a more folk version of White Wives, Harvey’s previous project. Imagine Tom Petty’s straight forward riffs, Bright Eye’s Digital Ash In A Digital Urn, and a 60s socialist folk singer starting a band.

Two Coyotes is more confident in all aspects from Roger Harvey’s debut and has a more natural sound. Despite being a relatively somber album, letting subtle guitar strokes, violin, and atmospheric flourishes float in and out of songs, the instrumentation is carefully placed allowing maximum effect. The production deftly captures the dynamics sometimes making silence sound as loud as when songs hit full stride, as it does at about the 3-minute mark in “Are You My Mother?”. It’s worth noting Two Coyotes was recorded on music row in Nashville at Ronnie’s Place, a studio once owned by Roy Orbison and Ronnie Milsap. There’s also a connectivity to the album with songs transitioning into one another as happens at the end of “Love In The Digital Age” into “Sleepwalker”.

That connectivity and repeated lyrical themes gives Two Coyotes a quality of best enjoyment when listened to as an album. It’s well tracked and not a minute feels wasted even with a 45-minute run time. Because of that, it’s almost impossible to pick standout tracks. However, repeated listens will highlight standout moments punctuated with memorable observations about getting stoned in Dolores Park, peace of mind on Two Street, or the black tattoo you got in high school.

Overall, Roger Harvey’s Two Coyotes is an immensely enjoyable album, both thoughtful and laid back. When the futility of existence is only matched by the persistence of time, we now have a soundtrack to accompany it.

Brick By Brick: Thin the Herd