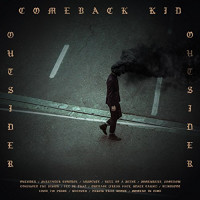 Comeback Kid has been toiling away, touring the world and releasing records for 17 years now. Their first full length, Turn It Around, was released in 2003 and they've steadily been churning out hardcore genius since. It was after the second record, Bill Stevenson produced "Wake The Dead", that original vocalist, Scott Wade stepped away from the band leading to guitarist Andrew Neufield taking over vocal duties. While it took him 2007's "Broadcasting..." to find his voice, this change ultimately led to a better band.


2017's "Outsider" seems to be a direct response to the more traditional hardcore sounds of 2014's Die Knowing. Where that record was a straight shot of fast and hard, this record diversifies the CBK sound with a lot more melody and catchy hooks. One of these "lighter" moments shines through on the bouncy chorus of "Somewhere, Somehow". ALMOST radio friendly stuff. Side A ends with a cameo from The Flatliners Chris Cresswell on "Consumed The Vision". The bridge is all kinds of hooky before going back into chugging mode. It's not all hooky choruses though. Metal legend Devin Townsend shows up to lend a voice to the very heavy, very fast "Absolute". New drummer, Loren Legare, plays at breakneck speeds, proving himself as this bands newest addition. Townsend produced the underrated CBK side project Sights & Sounds with some of that "wall of sound" flavor leaking into Outsider.


Side B, the back half of this record, doesn't quite hold up as well as side A. Not to say it isn't good. The first half is just hit after hit. "I'll Be That" is more traditional hardcore which is played fine, just not particularly exciting. "Blindspot" allows for gang choruses aplenty, which are bountiful on this record. "Livid, I'm Prime" has a pop punk-y chorus to mixed results. This band is at it's best when playing fast and loud but these somewhat more poppier influenced moments really allow the listener to appreciate the aggressive side to this band. This album is perhaps their most diverse since 2010s brilliant "Symptoms Cures". Album closer, "Moment In Time", features Victoria native, folk troubador Northcote which gives the album a somber finish.


These songs should adequately tear your face off live.