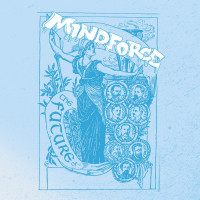 Hardcore is a genre that can be hard to keep up with. There’s always stories of crucial house shows or early out-of-print 7-inchers that make it hard for the casual fan to dig in past some of the bigger bands that headline the genre. Unless you are immersed in the bandcamp pages and obscure hardcore fansites that trade this information like currency, bands with a buzz seem like they can bubble up out of nowhere. Enter Poughkeepsie, New York’s Mindforce, a relatively new band beginning to see that buzz on the merits of their 2017 release The Future Of…

Mindforce are a thrash/hardcore crossover. Rising from the ashes of local Poughkeepsie hardcore vets Living Laser, they began making a name for themselves with a self-released demo in 2016. The Future Of… marks their second release and first on Trip Machine Laboratories. The 5 song EP opens up with its title track setting the stage for a groove oriented 10-minutes of chugging guitars, thrashy riffs, and call and response vocals. There’s an appreciation for the history of crossover with enough new tricks in these tracks to stand and deliver on their own.

“They Just Want War” has Mindforce adding metal guitar leads to the breakdown as their singer oversees a call and response section about the war machine. The vocals help the band stand out giving their sound both a throwback to early 80s crossover and kinship to newer bands like Turnstile. Most are delivered from a higher registry than the typical shouts that dominate the genre. Mindforce also hit a number of sounds on The Future Of… highlighting their proficiency and tightness despite their newness as a band. “Storm About To Burst” and “Run Tell Them” deliver metal freakouts in the middle of the songs before closing on their bread and butter guitar driven chugging.

With the buzz surrounding Mindforce, 2018 should be a good year for them where they have the opportunity to breakout to a bigger audience.