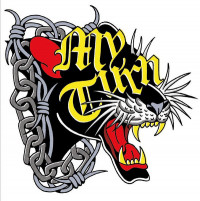 Punk rock is a serious, politicized, hardcore DIY business in Greece. For years there was a divide between the DIY and formal venues, where bands from one scene were not always ‘welcome’ by the other. This schism of sorts has subsided in recent years, which is great because it brought different sounds and crowds together.


My Turn were initially formed in Athens back in 2010 and reflect this shift, melding a fresh (for Greek standards, at least) take on hardcore with the politically and socially conscious conviction of older bands. After a demo, LP and a couple EPs they went on a brief hiatus, only to return a year or so later with a new lineup, now based in Volos. They are one of the more active touring bands and recently released their second, self-titled LP.

Stylistically, My Turn draw their influences from the more recent offerings of the USHC scene, as opposed to the more typical Amebix/Tragedy-worship that remains immensely popular in Greece. In their earlier years they had a bit of an H2O or CIV influence, i.e. the more ‘polished’ punk rock spectrum of that late 1980s NYHC sound, verging on pop and skate punk. Their shouty vocal delivery has always reminded me of xLooking Forwardx (minus the Jesus love) and other similar bands from the early 2000s that were being a bit more adventurous in their youth crew revival. Over the years though, they progressively adopted a harder and heavier sound, bringing to mind Backtrack, Terror and Down To Nothing, with the occasional metal-influenced leads.

There is a bit of everything on here for the seasoned mosher; album-opener “The Shield” has a rocking intro and a satisfying gang vocal part near the end, while “Stand Up & Fight” has an ideal circle-pit tempo and plenty opportunities for stage dives. On the flip side you get songs like “Angel” with a strong metal vibe, which initially threw me off a bit, but was a welcome change of pace, while “Still On Our Feet” has a bit of a modern Agnostic Front vibe with a sweet bass sound that will brings smiles to the mosh pit.

They might not be the most original band on the block, but what they do, they do competently and enthusiastically. Compared to earlier releases, they have focused on making the breakdowns heavier and reduced the Turning Point-esque guitar parts. This is evident in the duration of the songs, none of which reaches the 3-minute mark, as opposed to their earlier, lengthier material. So straight to the point and no messing around.

Stick To Your Guns: True View

All Out War: Give Us Extinction