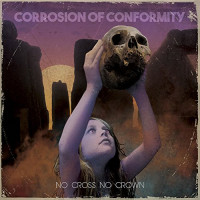 Thirteen years have passed since Pepper Keenan last made an album with Corrosion Of Conformity. Eighteen years have passed since all four key members collaborated on an album. A whopping twenty four years have passed since COC broke into the mainstream with Deliverance, their lone gold album. By that time, the band had already been around for more than a decade and made a couple of significant style changes. That 90’s version of the band was undeniably the most popular. This reunion album from that lineup was highly anticipated by many of us who were hoping the North Carolina quartet could recapture some of that old magic.

I assume the title No Cross No Crown is a play on the old punk slogan ‘No Gods No Masters’. The name might be a nod to the band’s hardcore roots, but the sound is more like the stoner metal of Wiseblood (1996) and the criminally underrated In the Arms of God (2005). Not surprisingly, it sounds most like Deliverance (1994). That was the only other COC album with short instrumental songs between the proper songs. “Novus Deus” is basically a minute and a half long intro to “The Luddite”. “The Luddite” has one of those big, lumbering, Black Sabbath riffs that has come to define the band for the last two decades. It also reassures us that Keenan’s voice is still in fine, raspy form. “Cast the First Stone” is a little shorter and a little catchier, and feels more like a potential single.

The short wordless “No Cross” previews the title track and leads to “Wolf Named Crow” and “Little Man”, two of the record’s best songs. Acoustic instrumental “Matre’s Diem” fades into “Forgive Me”, which is probably my favorite track overall. It manages to be heavy and vulnerable at the same time. Next up is “Nothing Left to Say”, the longest song at almost six and a half minutes. It alternates between mellow and heavy, and shows a bit of a Southern rock and soul influence. “Sacred Isolation” is the last of the short instrumentals. “Old Disaster” and the 70’s influenced “E.L.M.” are both great songs with huge riffs. “No Cross No Crown” sounds like a dirge. It has no drums, but lots of moody atmosphere. It’s also way down at the bottom of Keenan’s vocal range. Things wrap up with the slow, heavy “A Quest to Believe (A Call to the Void)”, and the psychedelic “Son and Daughter”.

Corrosion Of Conformity continues to make albums for the CD era. No Cross No Crown comes in at 15 tracks and almost an hour in length. While I like to get my money’s worth, it might have benefited from some trimming down. The short instrumental tracks aren’t really necessary, and some of the longer tunes could have probably been tightened up a little bit. That being said, No Cross No Crown has to be considered a triumph. Be warned, it’s not a quick and easy listen. Like In the Arms of God, there’s a lot to unpack and it requires multiple spins to be properly absorbed. The weight of expectation was heavy, but ultimately COC delivered.

The early Corrosion Of Conformity albums were largely social and political commentary, but ever since Deliverance, their albums have had strong spiritual themes. No Cross No Crown is no exception. It’s like these Southern boys who long ago abandoned the religion of their youth can’t entirely seem to shake it. It’s really quite compelling. That inner struggle has inspired some wonderful music over the years, and the well seems far from dry. Guitarist/vocalist Pepper Keenan, guitarist Woody Weatherman, bassist Mike Dean and drummer Reed Mullin still have an undeniable chemistry, and No Cross No Crown is a satisfying return to form.