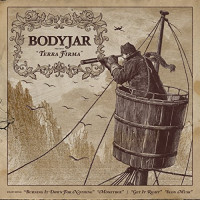 Perhaps, like me, the first time you heard Bodyjar was on the Nitro Records 2001 compilation “Punkzilla”. This comp was and still is a gem from a bygone era when, in the world of punk rock at least, compilations were one of the best ways to discover new bands. On Punkzilla, stellar B-sides by contemporary acts such as AFI were placed alongside classics from bands like The Damned and TSOL, which led the listener to newer bands (at the time) such as Son Of Sam and Rufio. Nitro knocked it out of the park with this one. “Not the Same” by Bodyjar happened to be track 3, sandwiched between The Damned’s scathing “Democracy?” and The Vandals jokey, bouncy “Behind The Music” and though this Australian skater, pop punk band has been in some form or another since 1992, with multiple albums to their credit, this was the first time they had caught my attention.

Bodyjar went on to release two more albums after 2000’s “How It Works” to diminishing returns, which ultimately led them to a hiatus in 2009. The band returned in 2013 with the outstanding “Role Model”, an unabashedly pop/skate punk affair that left behind the slower, riffy rock moments that plagued their more recent records and embraced their earlier, faster esthetic.

A full length would have been much preferred by this band in 2017 but what fans got was an incredibly solid 4-track ep. Terra Firma continues on the punk rock journey that the refreshing “Role Model” re-ignited. Now the elder statesmen of punk rock, these guys seemingly write a hooky melody with ease.

“Burning It Down” is a mid tempo rocker but this wets the palate for “Money Box” which begins promisingly with just Cameron Baines voice and his guitar followed by an uplifting chorus and galloping skate punk riffs. “Get It Right” is another mid tempo song powered by Cameron’s distinct and urgent vocals. The final song on this all-too-short ep, “Elon Musk” is the highlight of this recording. A shredding, fast, catchy punk rock banger with a distinct guitar sound leading the charge.

Nothing on this record is particularly original when it comes to pop punk but by God this aging quartet do it well. This brand of skate/pop punk has been done to death and these days I find myself searching for something different. Maybe music more challenging within the punk rock scope then what I cut my teeth on when I was a youth but Bodyjar have proven that this genre is not dead. It’s all in the songwriting and these cats seem to have no problem with that.

Corrosion Of Conformity: No Cross No Crown

Neck Deep: The Peace and The Panic