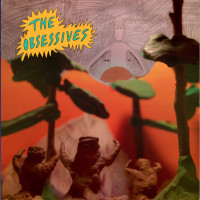 Simpler times. We all want them. It’s a longing to be transported back to when the final scene in Fight Club led us to first discover The Pixies’ Surfer Rosa and after, we shortly stapled the iconic album art on our college dorm room or first studio apartment. A memory that evaporates with the weight of adulthood forcing out those moments that connected us to those simpler times. The Obsessives’ self-titled encapsulates that feeling nicely.

The Obsessives are originally a two-piece hailing from Washington D.C. who cite the aforementioned band and early emo stalwarts like The Promise Ring and Braid as influences. In contemporary practice, they come off somewhere between Surfer Blood and The Front Bottoms on their latest. The Obsessives begins with an intro that melds into the first real song of the album “You’re My God.” Immediately, you will notice the same monotone vocals that dominated early Front Bottoms and Tigers Jaw records. In the opener, crunchy power chords riff through a two-minute ode about playing it cool in spite of life’s challenges.

Stand out tracks include “Surfer Rosa” which has Ozma-esque keyboards sprinkled throughout leading to a dancey chorus which, quite literally, recalls that first time you heard Surfer Rosa. “It’s Not Fair” is reminiscent of The Front Bottoms early material with stomping drums building tension as lead singer Nick Bairatchnyi laments an unrequited love. Love is a topic explored throughout the record, both falling in and out of it. “Sometimes,” “It’s Ok If,” and “If You Really Love Me” earnestly cover various aspects of relationships doing so with quirky lyrics and guitars, simple bass lines, and tactful drumming.

One downside on The Obsessives is some songs feel less thought out than others, almost serving as transitions to the more complete ideas. It has a similar effect to Joyce Manor’s Of All Things I Will Soon Grow Tired. However, they do hint at an underlying ambition not fully discovered on this release. In addition, sometimes the vocals can make the album drag a bit although the occasional female backing vocals temper this.

The Obsessives is an arty-pop record at heart delivered with a longing for simpler times. Put it on and reconnect to those moments.