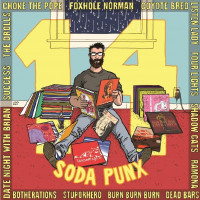 Back in 1993, Sicko’s frontman Ean Hernandez released the a pop-punk gem in the form of the 13 Soda Punx compilation featuring the likes of Fastbacks, Bum, Cub and a host of other great bands, including his own.

All these years later finds Hernandez once again curating a compilation which seeks to go one further than its predecessor by bringing together fourteen bands from Seattle to document its thriving underground scene.

Although Sicko don’t feature here, Hernandez has a new outfit, Date Night with Brian, which also gets an outing on this record, a welcome inclusion given the band’s cracking self-titled debut EP earlier this year. When looking through the other thirteen bands featured, it’s a strong line up just from those I am aware. Success, Listen Lady, Ramona, Four Lights form enough interest for me to delve in with high hopes.

Remarkably this record could be picked up and dropped back into 1993 and be seen as the perfect immediate follow up, such is its ability to recreate the vibe of the original bands of that time. It’s all about pop-punk, be it scrappy and unrestrained or slightly more pristine in its delivery. I loved the first comp and its follow up, which admittedly has come out of the blue, gets me all worked up like my 27 year old self did back then. I must admit, It’s not a genre I immerse myself in like I did last century but this could be my reintroduction to something that was very special to me in those years.

Out of all of the tracks it is “Getting Old” by The Drolls which stands out the most as it reminds me a lot of Sicko and also are words frequently on my mind these days as my body decides to make a point that I am no longer a spring chicken.

The Drolls are by no means the only success here as the track “Kurt Bloch” (Fastbacks’ singer and guitarist) opens proceedings as Success give credit to a man whose input to the world of pop-punk is legendary. Other bands worthy of mention include Shadow Cats for another very Sicko like tune, Burn Burn Burn for providing the most explosive track and Dead Bars for making me smile the most with “Krist Noveselic’s New Band”.

This album would be good enough on its own but it’s also a precursor for the Seattle Pop Punk Festival taking place in January, featuring seventeen bands over two days. And yes, Sicko will be playing. I must repeat that: SICKO IS PLAYING. If you need me, I’ll be buying lottery tickets constantly whilst listening to 14 Soda Punx in the hope of getting together the money to head to Seattle in the New Year.