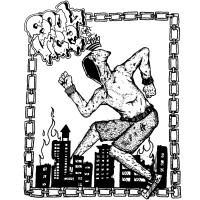 Hardcore, for me at least, is best when it’s at its simplest; when the guitarist isn’t trying to show off his heavy metal past, the singer isn’t trying to be poetic and when the rhythm section isn’t waiting for its solo cues. Soul Vice from Colorado Springs is a band that keeps things refreshingly simple, in a what-you-see-is-what-you-get kind of way.

From the demo tape’s cover and title you should know what to expect: old school guitar riffs that occasionally dip into 1980s thrash, mid tempo drum parts that will please anyone who wears basketball shorts at shows, creepy crawly bass-lines and a singer who sounds like he’s taking a time out from a back-alley street fight to tell you about how tough life is.

Demo opener “Intro” perfectly sets the tone of this 5-minute offering: ominous cymbals and a nasty bass-line build up to a quick crescendo, just in time for the heavy beat (the type that should be played with the drum sticks upside down, for extra dramatic effect), jackhammer guitar riff and singer’s “Get two-Stepping!” battle-cry inform you that the pit is now open for some good ol’ fashioned, good-natured two-stepping action.

The experience throughout the other three songs is more or less consistently the same. “Pay The Price” has a fast mosh part before the inevitable bass-heavy breakdown, while “Debt” kicks off with a fast thrashy part and squeezes in a haunting bass-line near the end. Demo closer “Sleep” is perhaps the less refined and weakest of the bunch, but at just over a minute it doesn’t really affect the overall effort. In a live setting this would be the song you strategically sit it out to take a breather or have a quick look at the merch stand.

If you need any points of reference, earlier Come Back Kid, Piece By Piece and the short-lived Minority Unity come to mind when I’m blasting it on my boom box. If you wonder whether bands like these are relevant, the answer should be a resounding “yes”; hardcore truly shines when it gets you to swing your hips in an uncomplicated way and Soul Vice do just that.

The Replacements: For Sale: Live at Maxwell's 1986