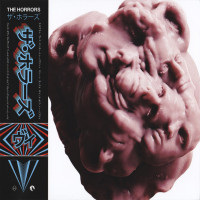 Progression has been very kind to the Horrors. On their debut album, the British five pieces’ raucous blend of garage rock fuzzboxes and ‘76 punk was a refreshing change from the Maroon 5-Fall Out Boy-T Pain fest that was the pop music class of 2007.

And while we would all have been plenty content with more of that sound, on their very next full length, 2009’s Primary Colours, the Horrors threw a fantastic curveball and dropped one of the best 80’s albums in over 20 years.

Chilling out even more on the subsequent Skying in 2011 and Luminous in 2014, the Horrors are now a full fledged shoegaze band, and a damn fine one at that.

On 2017’s V, the Horrors stretch out and reach for that volume knob once again. While certainly not a return to their garage punk debut, V is a shivering and rollicking wake up call for anybody who may have made the mistake of assuming these guys were beginning to rest on their laurels.

Tracks like “Hologram” and “Machine” are laced with the kinds of hyper breakbeats that would be comfortably at home on an Aphex Twin or Meat Beat Manifesto album, along with warm synth melodies and brooding melancholy vocals. “Ghost” and “Point Of No Reply” slow down just a little bit, building on the bands goth roots and implementing the old Cure studio gimmick that I like to call “flange upon flange upon flange upon flange.” The lush layers this creates is sonically pleasing and creates a world that’s both familiar and enticing.

Just past the midpoint is “Weighed Down”, which unfortunately feels just as such. The track gets off to a slow and uneasy start, and despite a little more interesting final quarter, is the low point of the album. No worries though, “Gathering” soon comes along to be perhaps the most unique track on the album. And by that I mean, it’s a friggin rock song. It has an acoustic guitar, it has steady rhythm and melody, it has a traditional structure. It’s Pablo Honey during a marathon of Kid A.

Keeping the album to a tidy 10 tracks, closer “Something to Remember Me By” reminds me of the earliest New Order material. It’s groovy without being a true dance number. It’s playful while still moody, and at just under seven minutes long, it has enough heft to it to have its own identity without taking away from the rest of the record.

The Horrors’ ever evolving palette is an invigorating ride to be on. With each new album, with each new identity, one surely expects them to have a slip up every now and then. But five albums in, these guys are standing on some very solid ground. They know full well where their talents lie; in changing. One of the most important things a fan can say to a band is “Ok, so what’s next?” And each time, the Horrors have responded with an ingeniously surprising new face.