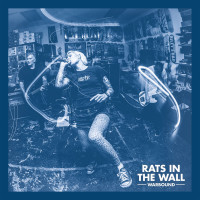 Rats In The Wall

The members of Rats In The Wall have started out 2018 quite strong with the release of their EP Warbound. In five tracks (including one cover) the band has made the statement that they are more fierce than ever and clearly not to be messed with.

In true Rats In The Wall fashion “Take 3” spares no time in getting started. Right away Brad Logan’s guitar jumps right at you with Eva Hall’s sharp vocals following close behind with lyrics that seem to express this “emotional tug-of-war” where she is wondering whether punk rock was the right path in life to take even though it is the only place she ever really felt at home: “And maybe out parents were right — maybe punk rock ruined my life/ It’ the only place I’ve ever belonged/ My chosen family — as dysfunctional as they came.”

On the musical side of this 7-inch, the title track is where Brad’s guitar just rains distortion onto you and along with Donny Morris’s insanely hard-hitting drumming it really creates a perfect storm for a massive hardcore tune. About half way through “Warbound” Brad also incorporates these wildly long bends that complement and almost compete with the Eva’s vocals. It’s a really cool dynamic that only a band like Rats could pull off. Interestingly, the band included a cover “Removal” by Spitboy on this EP which was quite a good choice. Not only is the production much better than the original version, but this is where you can tell Eva really pushed her vocal skills. Because her shouting and screaming is so uniquely brutal it is pretty easy to hear her own spin on the song. Plus, “Removal” fits right in to the sludgier and (sometimes) slower overall sound of Warbound. Again, it was a spot-on tune to cover for this EP.

With Warbound, Rats In The Wall continue to be one of the most unique hardcore bands out there right now. Lyrically, the band is as dark and confrontational as ever and musically they continue to push the boundaries of what a band can do when mixing hardcore and crust punk.

Stray from the Path: Only Death is Real