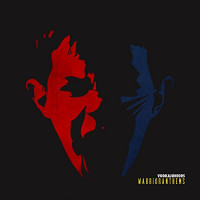 I must confess that when Vodka Juniors first appeared in Athens about 20 years ago, I was not really a fan, thinking of them as “mere” Fat Wreck sound-a-likes. Over the years though they have consistently demonstrated to me just how wrong that first impression of mine was, thanks to their intense live shows and solid discography.

They started off with a sound similar to RKL, early Strung Out and Propagandhi; thrashy skate punk that progressively introduced tasteful metal worship to the mix. Later on they went through a Sublime phase and released a double album with quality dub, reggae and acoustic jams and after an extended break they returned a couple years ago with an updated sound and an epic triple album. Their new outing, “Warrior Anthems”, is thankfully more restrained and at 11 songs clocking in at about 40 minutes, it feels like a much more focused release that showcases their newer sound.

Lyrically their themes remain mostly the same; coping with alienation and the angsts of living on the margins of the modern world, the need to reclaim and enjoy your life to the fullest, all while championing the DIY (or with friends) way of doing stuff. Musically though their formula of driving punk rock guitars, metal-influenced solo work and galloping drums is fine-tuned with the thoughtful and inventive use of electronic elements and a more polished, slick production that make the new songs shine.

Album opener “Fighting Giants” perfectly sets the standard for what is to come; thrashy guitar parts, anthemic choruses and a generous smattering of keyboards and synthesizers to accentuate their calmer and more experimental moments. “No Rest” sounds like it could have stood out on any of the Fat Wreck or Epitaph compilations from ten years ago, while on the keyboard-driven “This Life” they slow the pace enough to give the kids a moment to breathe from all the circle pit action. On songs like “Lost Souls” and “Renegades of Punk” they introduce some jungle loops to the mix, while “Sweat It Out” has a highly danceable disco atmosphere.

It is on “Battle of Athens” however where the seams between their past, present and future are perhaps most apparent, bringing to mind the finer moments from their more straight forward first full-length, only enriched with horns, keyboards and atmospheric female vocals. The album triumphantly closes with the whoa-heavy stadium rock epic “Queen of Scars”, leaving me with a very strong desire to hit play again.

Stray from the Path: Only Death is Real