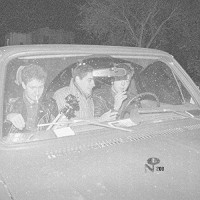 The opening salvo to Husker Du’s extensive Numero Group boxset reissue Savage Young Du provides the definition for the band’s Norwegian / Danish moniker (Husker Du = Do you remember?). Per Grant Hart, “Do you remember when rock ‘n roll was good?” Born in the Twin Cities four years after Ramones and just as Prince Nelson had been signed to Warner Brothers Records, three teenagers combined their formative rock influences with the new sounds of the burgeoning American underground punk scene. Savage Young Du is a lovingly curated boxset including an extensive history of the band leading up to the Metal Circus EP and Zen Arcade. The accompanying book tracks the band’s roots as young record store loiterers, recounts their first shows, and documents their first recording experiences. There are also multiple pages of show flyers for fans of DIY punk artwork and extensive documentation of their first major tours. The first LP is all early demos and unreleased live tracks. LP 2 is the “Statues” / “Amusement” single originally released on Reflex Records accompanied by additional unreleased tracks. LP 3 combines an alternate recording of Land Speed Record and the “In a Free Land” single both issued by Mike Watt and D. Boon’s New Alliance Records (an SST-affiliated label). Finally, LP 4 contains Everything Falls Apart and further unreleased live tracks that would become Metal Circus. All songs have undergone Numero Group’s careful remastering process and prove sonically superior to their original incarnations.

The revelation in this boxset is the first LP of unreleased demos and early unissued recordings that depict a nascent Du in search of a sound. Partially recorded in the basement of local Northern Lights Records on a 4-track, most of these tracks draw on classic ‘50s and ‘60s rock with an overlay of distortion. The key differentiation in the songs “Sore Eyes,” “Can’t See You Anymore,” and “Sexual Economics” is the frank sexual discourse in the lyrics that (like the Ramones before them) subvert the teenage themes of those early rock records with a blunt depiction of modern adolescent cravings. Furthermore, where Greg Ginn was a master of inserting atonal jazz freakout solos into Black Flag’s crushing guitar assault, Bob Mould mirrors his peer J. Mascis in classic rock inspired discharges into Husker Du’s layered distortion. “The Truth Hurts” slows down the tempo and allows space for handclaps to propel Mould’s guitar excursions. Terry Katzman (the band’s partner in Reflex Records) relates the following regarding the live recording of “Outside” at 7th St. Entry a “small-room adjunct” to what-would-become the legendary First Avenue in Minneapolis, “the stage volume was so loud from those guys” that mics used to capture the band live were taped to the back wall of the club.

The “Statues” / “Amusement” single is the first sign of some innovation and evolution in Husker Du’s sound. “Statues” bounces on an oscillating bass riff with a reported Public Image Limited influence. “Statues” was the band’s initial bid to being signed by Twin/Tone (who later picked up the Replacements) and instead lead to the founding of their own DIY Reflex Records. “Statues” leers at the surrounding pervasive conformity at the beginning of the Reagan ‘80’s, asking “Are you different are you new? / No you’re just a statue.” The unissued songs recorded at the same time as this single are Mould’s “Writer’s Cramp” and “Walk With the Wounded” along with Norton’s “Let’s Go Die.” Admittedly, these songs were slower than the hurricane of the live record that follows.

Savage Young Du’s version of Land Speed Record is taken from a recording of a show on September 5,1981 with nearly the same setlist as the original version recorded in August. Despite the remastering, the live set continues to barrel by in a frantic cacophony, capturing the Du’s intent to be the fastest, hardest band in the Twin Cities after a sojourn on the West Coast exposed them to the metastasizing sounds of hardcore. Any sort of melodic nuance is buried in the blitz, and while the record is a hardcore landmark, there’s not much to revisit once the initial headrush subsides. Interestingly, the band unearthed a superior second 5-song set that followed the original Land Speed Record on August 5, 1981. These songs allow a more measured pace and display the strong songwriting that would continue to evolve on future releases. “Private Hell” is a durable Mould contribution propelled by a bowling ball Norton bassline. An early version of the Metal Circus staple “Diane” blows everything on the preceding Land Speed off the map with a haunting vocal performance from Hart navigating Mould’s circuitous guitar monolith.

The New Alliance-issued “In a Free Land” single returns to the path of sonic explorations after the West Coast hardcore aping of Land Speed Record. It is the first song to allow a submarine melodic riff to breach through Mould’s ocean of distortion. The lyrical concerns of “In a Free Land” are classic hardcore defiance of “government [authorized] education / …[teaching] you what they want you to think,” echoed by the background “Don’t mean a thing!” The single is paired with the pounding “What Do I Want?” with Hart’s howling “What will make me happy?” answered succinctly with “NOTHING!”

The final LP’s Everything Falls Apart was recorded by SST in-house producer Glen “Spot” Lockett yet released on the Husker’s Reflex Records after being turned down by Joe Carducci at SST. However, the improved fidelity of this remaster illustrates the band’s growth over the preceding years. The exciting prospect of this boxset is tracing the ragged early demos to the unique take on hardcore displayed on Everything Falls Apart that also hints at the downstream sonic mutations yet to come. “Target” lambasts naysayers claiming punk had nothing new left to say, embodying a challenge the band would continue to answer with each new release. While some hardcore bands sought to completely bury the past, it’s refreshing to witness the solidarity to ‘60s rock that no doubt influenced the band in their faithful, energized cover of Donovan’s “Sunshine Superman.” Finally, the incisive title track simultaneously pairs an aqueous guitar line that washes over the distortion with lyrics that ultimately predict the band’s fate in a few short years: “If I did all the things that you do / everything could fall apart…Everything is so fucked up / I guess it’s natural that way / Everything falls apart.”

On a final note, Husker Du’s best albums were often hampered by mixes that failed to accentuate the dynamic interplay between melody and distortion which this new remastering from Numero Group seeks to rectify. The levels of the lead guitar peels and crushing distortion are better matched without smothering the vocal performances. One can hope for a similar treatment to accompany the band’s legendary SST output.

While I’ve yet to tackle Bob Mould’s autobiography with Michael Azerrad See a Little Light: The Trail of Rage and Melody, I highly recommend Azerrad’s Our Band Could Be Your Life for anyone interested in the stories behind the bands from this essential era of underground music. Each chapter is a readily digestible chunk of history on bands that are canonical to American punk music (Black Flag, the Minutemen, Minor Threat, etc.). Knowing the stories and lives of these bands makes the music hit that much harder the next time you hear it.