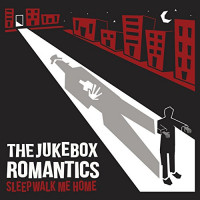 When The Jukebox Romantics’ self-titled debut album dropped in 2009, it was hard to set them apart from other pop-punk bands of the time. They covered all the right bases; melodic, medium speed songs about drinking beer, getting dumped, and going to work, with the occasional drop of ska thrown in for good measure. It was simple, it was fun, it was an indicator of better things to come.

For 2011’s A Lion and a Guy, the New Yorkers changed things up decisively, going for a much edgier, faster sound. And while I can’t say I missed the guesting horn section, I didn’t quite buy that fun time was over. Mind you there’s nothing inherently wrong with mixing things up here and there. I just feel as though this band functions best with their tongues planted firmly in their cheeks, and an entire album of metallic slam-alongs from TJR felt rather uncomfortable.

In 2015 The Jukebox Romantics came into their own with Transmissions Down. The proverbial charmed third attempt definitely did not sidestep these guys. The whole album was energetic and fun, while also seeing a welcome maturity in the writing (even if the song titles themselves still sounded like rejected Less Than Jake C-sides). They constructed a rock & roll record that pulled the best pieces from their past and meshed them very effectively with some new surprises along the way.

Which brings me to the actual subject of this review, Sleepwalk Me Home, released in December of 2017.

On their fourth album, instead of building upon what seemed to be their corner turn at the time, TJR took a step backward.

Okay, they actually took about 4 steps backward, as Sleepwalk Me Home sounds more like a predecessor to their debut album. Dropped are the great creative nuances and topical lyrics of Transmissions Down. Passed over is the rawness of A Lion and a Guy. Even the simplistic fun of their first album would be welcome here, as at least it seemed to be going somewhere.

What we have here is 10 monotonous tracks clocking in at under a half hour’s time, each one following the same pop-punk formula as the last.

I’m not saying these guys are bad musicians. The speedy and driving rhythm section is flawlessly executed; I actually wish I could isolate the bass and drum tracks. The guitars are clean toned and well placed, as can be expected in pop-punk, and there’s an adequate level of progressions and solos.

The problem here is that while there’s clearly talent present, it simply doesn’t go anywhere. An album can be aurally pleasing all day, but unless there’s enough variety in the structure of the songs, the listener will quickly get bored and move on. Three chords and the truth may have worked for 80s street punk and hardcore, but that was intentional.  TJR are clearly attempting to put the effort in; there are changes in overall mood, subject matter, and the like. But the stories being told here would be better served by allowing each one to exist in its own world, rather than having them all bleed together as they do. It’s unfair to the band as artists, and to us as listeners.

On a more positive note, I’m not ready to completely write off The Jukebox Romantics just get. The band continues to put on a hell of a fun live show, and has developed enough of a following that one subpar album is not going to blacklist them forever. If anyone can learn and grow in the studio, it’s The Jukebox Romantics.