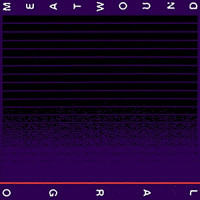 It should come as no surprise that Florida is synonymous with heavy music. For the past thirty years some of the most brutal music has come from Florida’s murky swampy landscape. Bands like Cannibal Corpse and Death reinvented the musical genres they inhabited; young energetic punk rock kids formed bands like Combatwoundedveteran and Reversal of Man, and took hardcore into a new more chaotic territory. Tampa’s Meatwound continues in this tradition of redefining the extreme musical landscape. Their aural assault is deafening, and will turn your guts inside out; and on their second full-length Largo, they go for your throat and never ease up.

Meatwound is comprised of 4 individuals that have all been involved in other bands through the years, but their past efforts have no bearing on what they bring to the table. They say they started as a result of failing to give up the dream of playing music, but I like to think they started to scare the living shit out of people. Their mission in my mind, has been accomplished. The opening track “Séance”, is anything but a peaceful gathering of the minds. The feedback from Ari’s guitar initially makes you want to put your fingers in your ears, but just as you’re about to do so a snare hit ushers in the band. The rhythm reminds me of a slightly faster Unsane-like groove. This is something that speaks to me directly as I love that style of that sick, dirty punk sound.

Though out the 7 song 26-minute assault it is impressive how seamlessly the band is able to blend all aspects of hardcore, punk rock, and metal. Many bands have tried to do this over the years, and while some have achieved this many have failed. That’s what makes it so hard to place Meatwound into one specific category. There is something on this LP for everyone that is a fan of any style of extreme music. I gather that the band members collectively have a love and deep admiration for the Amphetamine Reptile catalog, and early 80’s New York Hardcore.

After you’re kicked in the face by the opening track, Meatwound takes you to the floor with the next track “Pigs.” The lyrics are dark and deal with what the world is currently settling for as a normal existence. Vocalist / Lyricist Dan Shook is able to express through his lyrics and vocal style all the pain, anger, and distrust we as a society feel toward those in power. He gives all hardcore vocalists a run for their money. The musical beatings continue through tracks “Jungle Heart”, “Reproduction Blues”, and “Fleshtags.” The band never fucking lets up, and that’s what makes this such a great listen. “The Killer, The Princess, and The King” digs deep into that 90’s AmRep feel with a thick gloomy bass driven stomp, that is equal parts Unsane and God Bullies.

Largo closes with its title track, a fitting ode to the state the band loves to hate. It is the longest track on the LP clocking in at almost 6 minutes. In those 6 minutes Meatwound are able to put to tape what every other band from Florida has thought at some point in their lives, “Why the fuck are we still here?!” The music feels how an August in Florida would feel: sticky, grimy, and sick. The music is so thick and dirty that you can almost physically grab it as it blasts out of your speakers.

Largo may feel like despair wrapped in a cheap Publix $3.00 blanket, but underneath all of it there is a slight amount of hope, and I mean the slightest amount. You have to search hard to find it, but it is there. That’s the only way music that is this fierce and immediate can exist. There is a ying to a yang. If you’re looking for a record to soundtrack your sheer animalistic rage while baking underneath a brutal summer sun, Largo is your record. Meatwound are the greatest 90’s AmRep band that exists today. If Meatwound doesn’t get your blood pumping furiously through your veins, you may be dead.

Black Irish Texas: The Good, the Bad and the Indifferent