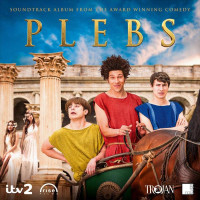 Friends! Romans! Rudeboys! Lend me your ears... because the Plebs Original Soundtrack has been re-released, and much like the score of the hit British sitcom, the album exclusively features reggae, rocksteady, and 2 tone ska. Taking place in ancient Rome, Plebs bills itself as "a thoroughly modern comedy in an ancient setting", and follows the lives of three young adults who have left their small town for the big city. Marcus (Tome Rosenthal), Stylax (Joel Fry), and Grumio (Ryan Sampson) must navigate the timeless perils of deadend jobs, making ends meet, and, of course, dating - all while dealing with the barbarities of olden times, including, but not limited to religious zealots, slavery, and even a brief stint in The Colosseum. Not only does Plebs expertly blend modern and ancient times, but also combines dry wit, crude humor, and slapstick comedy resulting in a show as original as it is entertaining.

The soundtrack begins with the show's themesong, "When In Rome", by composer Oli Julian and featuring noted reggae artist, Michael Prophet, on vocals. The album goes on to explore many facets of the genre, such as the jazz inspired big band brass of The Upsetters' "Return of Django", to the stripped down reggae stylings of "Gun Fever (Blam Blam Blam)" by The Valentines. Musical trailblazers, such as Desmond Dekker, Derrick Morgan, and The Skatalites, known to even the most casual Reel Big Fish fans, grace this compilation from front to back and keep you dancing throughout. With rhythm to spare and upbeats galore, the Plebs Original Soundtrack (released by the legendary Trojan Records) is a musthave for fans of the show and rudies alike.

One of my favorites things about Plebs is how the music has become such an integral of the show. Although the ancient Roman Empire and 1970s ska music have seemingly nothing to do with each other, the laid back, upbeat music fits right in with the setting, while its simplicity simultaneously juxtaposes the insanity ensuing on screen. This re-release has come in time for season 4 of Plebs, which will be coming out later this year. That should give you enough time to trade in your three piece suit and porkpie hat for bronzed armour and a galea (that crazy mohawked roman helmet) - but make sure to keep your checkerboard Vans slip-ons, because it's damn near impossible to skank in gladiator sandals.

Charles the Osprey: To Capture