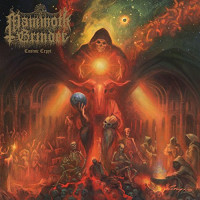 It's been five years since Mammoth Grinder graced us with their last LP, the fantastically vicious Underworlds. And since their inception in 2005, this Austin outfit has always kept fans guessing as to what they're getting on any given release. 2008's Rage and Ruin was somewhat of a metallic hardcore/punk affair, while the following year's Extinction of Humanity possessed more of an old-school death metal feel. Underworlds incorporated all of these elements, landing the band somewhere between apocalyptic crust metal and Entombed. Mammoth Grinder's latest, Cosmic Crypt, shows the band continuing in this vein, but in the rawest, most violent-sounding way possible.

Mammoth Grinder has perfected their brand of knuckledragger punk metal to a science on Cosmic Crypt's ten new tracks. The drums are absolutely thunderous and deafening, which is not much of a surprise when you realize it's Darkest Hour alum Ryan Parrish beating them like a rabid, foaming barbarian. Mark Bronzino, on loan from thrash titans Iron Reagan, is handling guitar duties this time around and he expertly lays down an unstoppable salvo of dissonant,  pummeling death metal riffs. Rounding out the line-up is Power Trip's Chris Ulsh on vocals and bass, his echoing low-end bellow providing the perfect voice to bring direction to this evil madness.

Mammoth Grinder proves themselves a force to be reckoned with, whether it be in the world of metal, punk, hardcore, or all three. As far as aggressive music goes, the band has a vast appeal. Whether you're into Entombed and Dismember, Black Breath and Nails, or Tragedy and Wolfbrigade, fans of everything heavy, nihilistic, and evil will find all that and more on Cosmic Crypt.