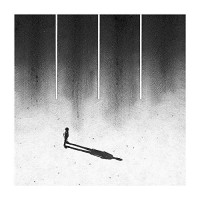 I have to confess that I wasn’t aware of Melbourne, Australia’s Alpha Wolf until someone recommended this album to me. Admittedly, they’ve only been around since 2013 and this is their first full-length record, but thought it only fair to mention.

When the record was described to me, it was labelled, in terms of genre, as simply ‘beat down’. I’m sure there are various other things you might want to call it (deathcore is the closest, I’d suggest), but the beat down label is certainly justified. Basically, that’s what Alpha Wolf trade in - beat downs (or break downs, depending on what terminology you prefer). Now, I enjoy a beat/break down as much as the next person - probably more so, in truth - but they need to be utilised correctly. Using them as the basis for your whole musical output seems misguided at best.

If you’re thinking that this all sounds rather linear and might become a bit wearing after a couple of songs, then you’d be right, sadly. There are moments when the compositions do come together quite well and feel dense and genuinely heavy as a result, but there’s not really any range on display. Which means those moments get lost in the dirge of what is basically low-tempo hardcore, without truly feeling aggressive, oddly. When it comes to the vocals, then we’re in standard hardcore territory in a lot of places, but smattered with a sort of affected emotional breakdown tinge that makes the whole thing feel quite silly in places.

The lyrics are also surprising and a bit incongruous. They’re straight from the emo playbook with lines such as “I slit my throat with the note that you left me”, “Please know I always loved you from the start” and even “I’m so sor-ry!” Bellowed as a pre-chorus/mosh call. It just feels a bit...submissive from a band that are presumably trying (albeit not entirely successfully) to exude aggression.

To give it it’s dues, it’s not all rubbish. The first track (Ward of the State) even begins quite promisingly, but the lack of variation creeps in really quite quickly and by the time they try any variation in the form of the title track, I had largely lost interest. Sadly, the attempt at variation itself falls somewhat flat as well, despite their best efforts at doing the stark, reverb-laden vocals thing over the top of a slow, plaintive bass line and even some cursory strings. It just doesn’t grab me.

Ultimately, I’m sure there is a market for this out there, but it’s certainly not me. On reflection, Mono seems like a sensible for an album that is as regrettably one-dimensional as this.